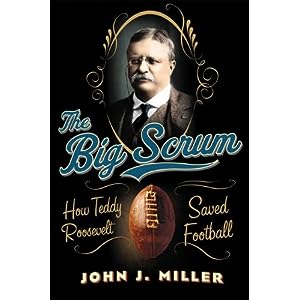 Many people would never put together the game of football and former President Teddy Roosevelt, but in this new book hitting the stands on April 12th – “The Big Scrum: How Teddy Roosevelt Saved Football,” author John Miller takes a look back at the history of the game and how Roosevelt’s influence and passion for the game actually saved it.

The 272 page book takes you back in time when Roosevelt stepped in back in 1905 and met with the National Collegiate Athletic Association and helped out in changing some rules that paved the way for the game today.

Some of the changes in rules included the yards needed to gain a first down from five to 10, the creation of a neutral zone at the line of scrimmage, and a decrease in the length of the game from 70 to 60 minutes.

It’s an interesting look back to a simpler time of the game, and a great read for all types of football fans from old to young. The book will be available on April 12th, and you can order it from Amazon by clicking HERE.

Steelers to Visit with Baylor nose guard Phil Taylor
Polamalu Speaks Out: “I Felt Very Good During the Super Bowl”