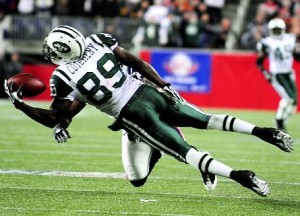 The Steelers have added to their WR core, coming to terms with former Jets receiver Jerricho Cotchery on a one-year deal. The move comes after Cotchery was released last week by the Jets.

The 29-year-old was taken in the fourth round by the Jets out of North Carolina State in 2004 and worked his way into the Jets’ starting lineup after a few seasons. Sure-handed and consistent, he has 353 career catches for 4,474 yards and 18 touchdowns.

He’s going to get a chance to make an impact right now, as Ward was just recently activated off the physically-unable-to perform list after having offseason thumb surgery and Sanders had foot surgery this offseason.