Starters to Go At Least a Half vs Falcons; Taylor Won’t Play, Hills to Start at Guard 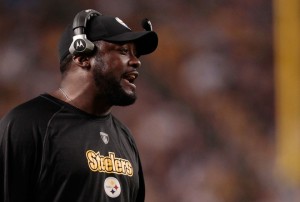 It’s the third preseason game that fans of their favorite teams usually get a good long look at the starters. That will be the case tonight for the Steelers as they host the Falcons at Heinz Field.

Coach Mike Tomlin said the starters will play at least a half, and there’s a shot that one of the units might even start the third quarter. He said his top two quarterbacks, Ben Roethlisberger and Byron Leftwich, will both play, but he hasn’t decided how he will use Charlie Batch and Dennis Dixon .

“For a young guy, there probably aren’t as many opportunities in this game,” Tomlin said. “This is a big step for us, for a lot of people. The clock is ticking, if you will, in terms of some men making a statement or making a move. They’re well aware of that.”

The Steelers looked awful in their first preseason game against the Redskins two weeks back, but bounced back in a big way last Thursday, going up 21-0 against the Eagles at Heinz Field before finally winning 24-14.

As far as Saturday goes, Tomlin has ruled out only one player so far for the game, that being cornerback Ike Taylor, who is recovering from a broken thumb. Taylor has been practicing while wearing a protective cast, but he is not expected to play until the opener in Baltimore on September 11th at 1pm.

The coach also announced that former offensive tackle Tony Hills will start for the second game in a row at right guard, though he cautioned Hills has not been anointed the permanent starter.