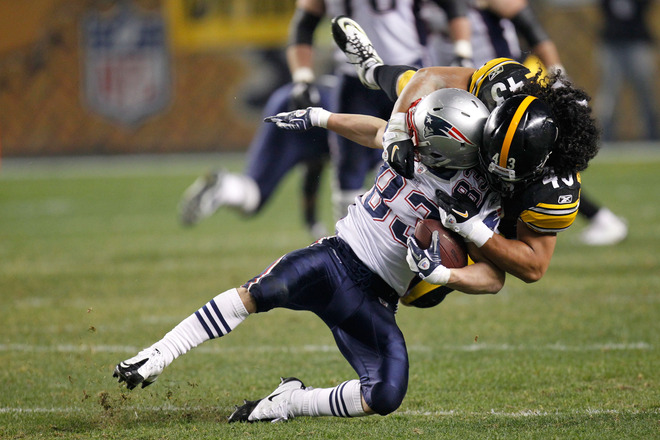 Polamalu gets to Welker in the 25-17 win

Bill Belichick decided to go for an onside kick, despite having three timeouts. The kick didn’t go the needed 10 yards, and the Steelers ran it down to 19 seconds before punting.

On the first play, Brett Keisel got to Brady, and the ball ended up being slapped out of the end zone for a safety by Ziggy Hood to make it the final of 25-17.

Pittsburgh nearly doubled the time of possession, holding the ball for 39:22 to 20:38. Rashard Mendenahll ran for 70 yards, and overall the Steelers outgained New England 427 yards to 213.

Their physical style was too much for Brady and the Pats, as it was a hard hitting game, and the Steleers controlled both lines of scrimmage.

They also made clutch plays when needed, as they went 10-for-16 on 3rd down conversions, holding the Pats to just 3-of-10 in that stat.

The defensive backfield flew around to the ball, made tackles when they needed to, and never let the Pats play the wide open style they try to and seem to end up playing each week.

With a now four-game win streak under their belt, the Steelers will get ready for a huge prime-time Sunday night showdown with the Baltimore Ravens next Sunday at 8:20pm.