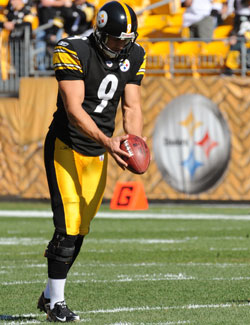 Another year, and another injury for punter Daniel Sepulveda.

It had been a great season for the Steelers lefty punter, but Saturday the team placed him on injured reserve.

Sepulveda landed on the team’s injury report late in the week with a right knee injury. This will be the third time in four seasons where an injury to his plant leg has landed the 2004 seventh-round pick out of Baylor on the injured reserve list.

Kapinos went to training camp with the Steelers, but was released in early September. Since his release, the left-footed Kapinos has worked out for the Baltimore Ravens, New England Patriots, Jacksonville Jaguars, Philadelphia Eagles, New Orleans Saints and had a tryout on Friday with the Detroit Lions.