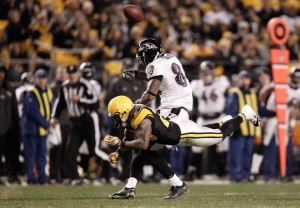 Sunday night the goofs in the refs shirts totally missed the illegal Ray Lewis on Hines Ward hit, but they were quick to get Ryan Clark on his questionable hit in the game, and for the second straight week he’s been fined.

Clark was hit with a $40,000 fine today for a helmet-to-helmet hit, his second in as many weeks. He’s also ticked about it, stating today that coach Mike Tomlin informed him of the fine and told him the hit was used by Tomlin on Monday as an example of a good hit in the team’s film review.

The hit came in the first half when Clark was flagged for his hit on Ravens tight end Ed Dickson. It was a marginal call, as Clark hit Dickson in stride, appearing to lead with his shoulder.

Also, the NFL fined Ravens linebacker Ray Lewis for his helmet-to-helmet hit on Steelers receiver Hines Ward in the same game. Lewis wouldn’t disclose the amount of the fine but a league source told ESPN NFL Insider Adam Schefter that the linebacker was docked $20,000 for the hit.

Clark was flagged for his hit on Baltimore Ravens tight end Ed Dickson late in the first half. Clark hit Dickson in stride, appearing to lead with his shoulder, but both players’ helmets made contact.

“This time it’s wrong, not that I respected Roger (Goodell) before this,” Clark told the Pittsburgh Post-Gazette.

He plans to appeal the fine.

Clark was fined $15,000 last week for his hit out of bounds on New England tight end Rob Gronkowski. Steelers linebacker James Harrison also is expected to receive a fine for a helmet-to-helmet hit in the game according to Adam Schefter of ESPN.

And in wrapping up this story, Lewis WAS fined for his illegal hit on Ward – too bad the awful ref crew from the game didn’t call it as they should – it would have given the Steelers a first and goal and easily could have changed the outcome of the game.

Woodley Trying to Convince Tomlin to Let Him Play vs Cincy
Poll: Who Wins Sunday Afternoon in Cincinnati?