State Of The Steelers Defense 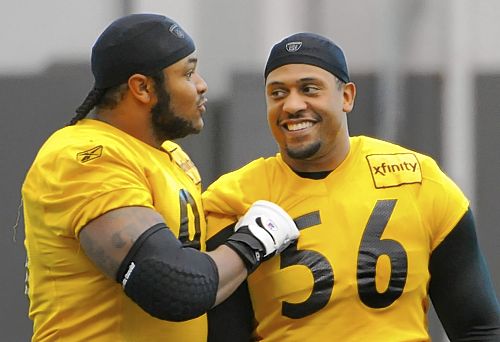 On Saturday, March 9th of 2013, the Pittsburgh Steelers released right outside linebacker, James Harrison. Harrison is a five-time pro bowler and has racked up a total of sixty-four sacks in the regular season. Harrison was named AP’s Defensive MVP in 2008 when he sacked the quarterback sixteen times and forced seven fumbles.

No one can forget the 100 yard interception touchdown return he had in Super Bowl XLIII, when Kurt Warner was driving the Cardinals down the field to take the lead right before halftime. Harrison had other thoughts. The Steelers ran the scheme that their very own defensive coordinator, Dick Lebeau, created himself, the zone blitz. Warner read Harrison on the blitz, instead Harrison drops back in coverage and the rest is history.

Harrison came into the league in 2002 out of Kent State as an undrafted rookie free agent. Harrison was released two times by the Steelers in his first two seasons with the team. In 2004, he played in all sixteen regular season games, and both postseason games. However, Harrison did not get his real start on the team until the 2007 season when rookie head coach Mike Tomlin released linebacker Joey Porter and gave the job to the fifth year man, James Harrison.

What game sparked the beginning of Harrison’s career? November 5th, 2007, the Pittsburgh Steelers were hosting division rival, the Baltimore Ravens. Harrison was making his fifteenth consecutive start at outside linebacker, but never had an over-achieving game.

That night the Ravens were held to 104 total yards and only five first downs all night. Harrison had a big role in these statistics. He racked up nine tackles, three and a half sacks, three forced fumbles, and one interception. That started Harrison’s out roar. He was the team MVP that season, and was the league defensive MVP the next. Now that the Steelers 4th all-time leading sacks leader has been released, where do the Steelers go from here?

Meet Harrison’s replacement, #93 Jason Worilds. Worilds was drafted in 2010 from Virginia Tech. He has not impressed the Steelers’ coaching staff as of yet, but Worilds has been held down with injuries and has had to take a back seat to pro bowlers Harrison and LaMarr Woodley in the past.

However, now that Harrison is gone, Worilds will be the man expected to take over. Worilds got to the quarterback five times last season with a total of eight over the course of his career. Worilds is in his contract season and will have to show the Steelers how well he can adapt to these changes in the defense.

He is entering his fourth NFL season, and has been in the same scheme since he has shown up to Pittsburgh. Will he be a player that can produce big numbers under pressure like his former teammate – Harrison?

How will the rest of the defense look now that Harrison is gone? Well the Steelers are expecting to lose cornerback Keenan Lewis in free agency, but previously reported, signed former Cardinals defensive back, William Gay. Gay spent the year in Arizona and was released after just one season. Gay finished the season fifth in tackles with fifty-seven. Along with two interceptions.

Ike Taylor is expected to be 100% healthy in 2013 after missing four games to an ankle injury.The Steelers also have cornerbacks Cortez Allen and Curtis Brown in the mix. Allen has established himself as a good nickel back in the defensive scheme and recorded two interceptions during the season.

Left outside linebacker Woodley is also expected to be 100% when the season starts. Woodley was recently criticized anonymously by someone in the locker room. Woodley has been fighting injuries for the past two seasons, so it is important to have Woodley in shape and healthy for the 2013 season.

The 6th year veteran signed an extension in 2011 and his stats have slowly declined since doing so. Registering nine sacks in 2011 and just four in 2012. The previous three seasons, Woodley finished with double-digit sacks.

On the defensive line, the Steelers look to be parting ways with nose tackle Casey Hampton. Steve McLendon will most likely take his place on the line. Brett Keisel and Ziggy Hood are coming off productive seasons at the defensive end positions.

However, Ziggy Hood is another player entering his contract season with the Steelers and it will be important to see how well he plays if he wants to continue his career as a Steeler.

The Steelers are starting to get younger and younger each year, and are pulling away from the players who have given them success for so many seasons. Last year we all remember losing veterans like Hines Ward, James Farrior, and Chris Hoke. This year, the Steelers cut tides with James Harrison.

A player that will go in as one of the best pass rushers in Steelers history. It’s sad to see him go, but at the same time, that is how the NFL works. The Steelers are focusing on re-building another team like they had from 2004-2011.

McLendon Gets A Low Tender, As Does Redmen And Dwyer
Foster And Steelers Agree To A Three-Year Deal