How Accountable Is Mike Tomlin For The Steelers Recent Failures? 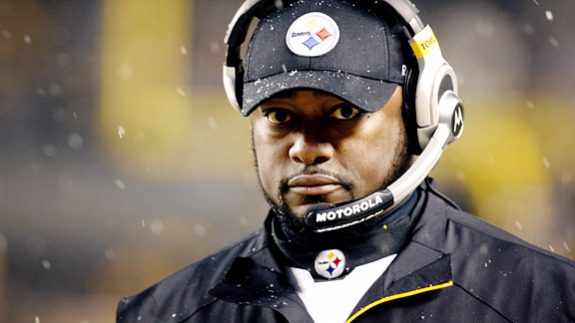 The Steelers will take the field for the first time this Summer on July 26th in Latrobe, PA, as another season starts for the Black and Gold.

While Steeler Nation will accept nothing but a trip to the postseason and a shot to play for a 7th Lombardi trophy, many so-called ‘experts’ around the league seem to feel the Steelers will struggle to finish at or near the top even in their own division.

A suspect offensive line that allows their franchise QB to get mauled, a LB core that has holes, and a defense that overall is getting rapidly old seems to be three of the bigger reasons folks don’t feel the Steelers will be one of the AFC’s best in 2013.

The team has had two rather down seasons, the first of which was 2011, when the team failed to beat the Ravens in two shots, limped into the playoffs, and were eliminated by an underdog Broncos team playing with Tim Tebow.

Last season the club was rolling at mid-season, 6-3, only to go 2-5 down the stretch, ending the year at 8-8 and missing the postseason for the second time in four seasons.

While the players and even assistant coaches seem to come and go, there’s one man at the forefront that needs to himself rebound and have his team playing not only good during the middle portion of the season, but at the end.

So why is the questioned even posed that Tomlin may be accountable for recent failures for the Steelers? Easy – he is – in a lot of ways.

Tomlin is at the top of the food chain, making the moves for players, the decisions on coaches, and even the schedules for things like practice and training camp.

It was Tomlin, who got a three-year extension in January of 2012, who decided to dump offensive coordinator Bruce Arians, coming up with a lame ‘retirement angle’ to then have to after weeks of looking hire former Chiefs hot headed coach Todd Haley.

It was Tomlin who went along with Haley on critical play calls late in games that eventually cost the Steelers huge games down the stretch last season in Dallas and vs the Bengals to knock them out of the playoffs.

It was Tomlin who seemed to rush QB Ben Roethlisberger back vs the 49’ers two seasons ago on one ankle, only to see him get pounded and have the Steelers falter to take the lead in the AFC North and have to settle for a wild card bid.

It was Tomlin who seemed to put the team on cruise control last week in week 14 vs the Chargers, again putting Roethlisberger back in charge, and watching his team suffer maybe their worst loss in his era at Heinz Field, dropping a 34-24 decision to the eventual 7-9 Chargers, who had never won a regular season game in Pittsburgh.

Fans started to moan more and more last season as they saw the Steelers falter down the stretch, not wanting to hear the same old lines from Tomlin, and no matter what the coach said it didn’t seem to help as the club couldn’t win key games when they had some in the bag.

Tomlin’s forte has been and still seems to be defense, yet while the numbers point to a top NFL defense, the Steelers D was a unit that lost games when they all they had to do was make 1-2 plays late.

Don’t believe me? Go back and look at the numbers in the following games – Oakland, Tennessee, Dallas, Cincinnati.

No one is saying that Tomlin should no longer have the reigns of the black and gold. It’s his team now, as other than a small handful of players those that played in Pittsburgh in the Bill Cowher era are history.

Even a large number of the players that were on the team when the Steelers won their 6th Super Bowl trophy in February 2009 are now no longer with the franchise.

That’s the way things go in the NFL, and for Tomlin, he’s had the luxury of having a strong voice in picking players in the draft like Ziggy Hood and Cam Heyward, two players that have not been as dominant as Steelers fans would have liked.

Last season it became obvious that Tomlin was outcoached late in games by a couple of novice coaches like Jason Garrett and Marvin Lewis, who guys who almost for sure will never hoist a Lombardi.

I’m willing to give Tomlin his due. He’s got two strong veteran coaches in Haley and Dick LeBeau still on his staff, and those two have to have strong voices to get the black and gold back to the playoffs.

Make no mistake though, the brunt of the criticism that the Steelers have to hear after big games falls on Tomlin, and well it should.

It’s time for Tomlin to face the music, and get this franchise turned back into the direction of getting closer to winning a Lombardi – not further away from it.