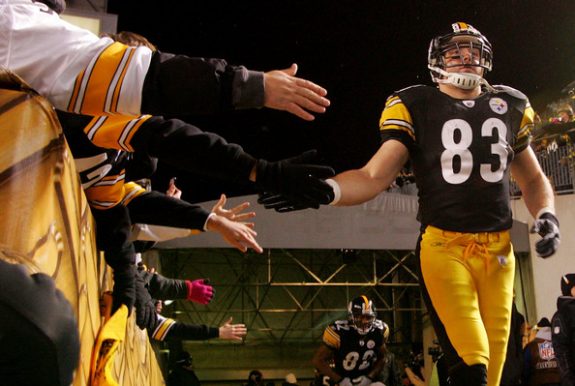 It all begins Friday for the Steelers in Latrobe as 2013 training camp officially opens, and maybe the biggest question mark is if the team will have their franchise tight end ready to play come week one.

Heath Miller, the 2012 Steelers MVP, continues to work his way back into shape from tearing his ACL, MCL and PCL. The injury took place in week 16, meaning that the reconstructive surgery is still an issue as he works his way back into the fold.

Miller had a monster 2012, and while players like Mike Wallace and Antonio Brown didn’t have the big seasons many felt they would, Miller did. All he did was catch 71 passes for 816 yards and 8 touchdowns.

He averaged 54.4 yards per game, but his ability to get open and make key plays is the reason why if he’s not able to take the field, it will be a monster blow for Ben Roethlisberger and the team.

As the Tribune-Review pointed out, last season The tight ends for the Steelers accounted for 96 of 354 receptions and caught 11 touchdowns.

Now the question is – will Miller be a part of that when the team takes the field opening day to take on the Titans?