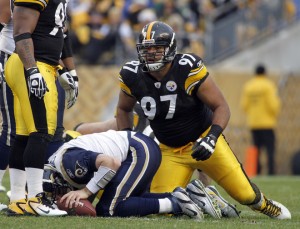 The injuries are starting to mount for the Steelers, which is bad news as there’s still plenty of practices left till the team takes the field for the first time against the Titans.

New to the list for Thursday though are a pair of defensive ends, as Jim Wexell of Steelers Digest says that Nick Williams and Cam Heyward both were on the sidelines for the session.

Wexell said that Heyward’s injury didn’t appear to be anything serious, which is good news.

Tight end Matt Spaeth, who was hurt Wednesday and had ice on his foot after being carted off, was also on the sidelines on Thursday.

NFL To Look Into How To Make Preseason Games Better
Burress Falls On Arm; Leaves On Cart During Thursday Session