Plenty To Work On; Steelers Sloppy In 18-13 Loss To Giants 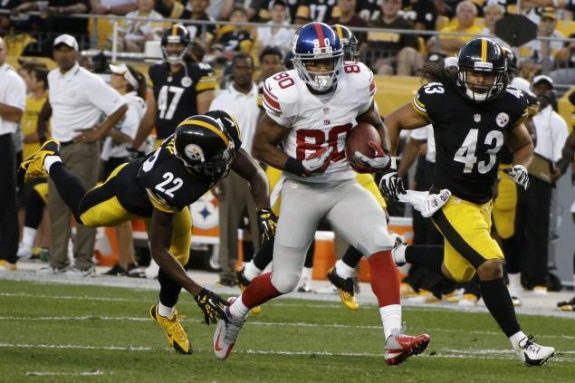 Well the first preseason game is in the books for the Steelers and let’s be honest it’s one that that can get a lot of film on what needs to be fixed.

The offense was sloppy and the defense was ok but the secondary looked very weak at times. The special teams were down right terrible and just riddled with mistakes.

The Steelers have a lot of work to do after this loss to the Giants, but at least its only the first game of the preseason.

The offense just could never really get out of its own way, there were times where the offense looked crisp, but foe the most part it was sloppy.

Ben didn’t get off to a great start and was sacked early, but on the second series led the team on a field goal drive that should have been a touchdown had Antonio Brown gotten his second foot down in the end zone on a great throw by Ben.

Bruce Gradkoswki looked very comfortable in the offense when he took over in the second quarter and also led the offense to a field goal. That would be the last of the scoring for the offense for the Steelers in this one. Landry Jones career got off to an ominous start as he misread his hand off to running back Baron Batch and it led to a safety that helped the Giants seal the deal.

Jones did rebound and have a respectable showing going 5-9 for 48 yards. John Parker Wilson looked bad at first as well but rebounded to get the offense moving a little on the last drive before stalling out.

The biggest surprise of the night for the Steelers on offense was by far LaRod Stephens-Howling. Stephens-Howling had 7 rushes for 40 yards, but he made great reads and hit the holes very quickly. Jonathan Dwyer was on the opposite end of this spectrum as he rushed for 15 yards on 6 carries, not exactly what the Steelers are looking for from the guy who was the front runner for the starter spot.

Dwyer also had two big drops that helped kill drives, both where balls that were easily catchable. Justin Brown finished the night with 4 catches for 32 yards to lead the team, and fellow rookie Markus Wheaton had only 1 catch for 8 yards but showed off the speed he is known for and ran very crisp routes.

The biggest winners of the night for the Steelers were the young defensive players fighting for a spot on the team. Defensive lineman Al Woods led the team with 9 tackles, one sack and two tackles for a loss.

Woods wasn’t the only player with a nose for the ball, as first round pick Jarvis Jones was around the ball a lot as he played and made some very nice plays, even though he looked lost and was caught out of position at times.

Vince Williams showed off his speed as well and was able to find his way into the backfield quite a bit, and was able to collect a sack, even though he could’ve had more. Adrian Robinson also had a good showing as he had 3 tackles, but more importantly gave the Steelers their only touchdown as he was able to recover a botched snap to Giants rookie QB Ryan Nassib that ended up in the end zone.

Alameda Ta’amu showed flashes of the talent that the Steelers saw in him when the traded up in the fourth round to draft him in 2012. Ta’amu showed great push off the ball, and blew up the Giants offensive line on a few occasions in the fourth quarter.

While it may have been against reserves and players likely not to make rosters in the league, these few young players showed, at least tonight, that they have the fight, desire and talent to make the Steelers roster this season.

Young players have been much needed on the defense for a couple of years now, and if any of this men can continue to make an impact then the youth movement is most certainly on in the Steel City.

Questions most certainly remain, like who will continue to make an impact and whose spot will they take on the team. A few of the young guys who showed up greatly tonight should definitely be given a shot at the better reserves to see what they can do against them because it will really help weed out the ones who are ready and the ones who aren’t.

Remember, it’s the preseason so theres no need to panic if the team goes 0-4. The biggest thing that needs improvement after tonight is the special teams, as there were just too many mistakes that led to points for the Giants. A blocked punt and a muffed punt were killers tonight and need to be fixed quickly.

Don’t worry much about the offense, it will click as the preseason goes on and players get more comfortable. The defense will do as it usually does and begin to tighten up the loose ends and be the strength of the team, especially if the young guys produce and provide the youth the defense needs to thrive.

Just remember, the game may have been sloppy and ended in a loss, but you learn more from a loss, and it is still just the first game of the preseason.