Brown And Haley Got Into It On Sidelines Monday Night 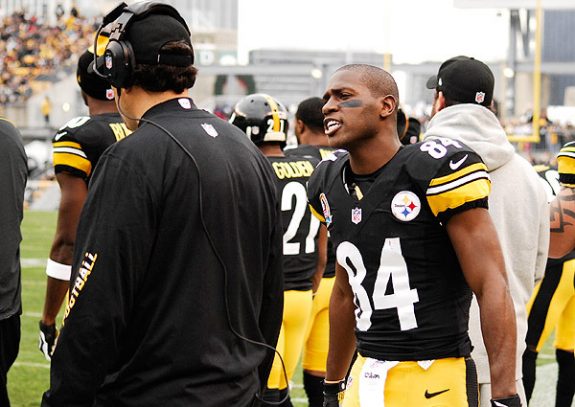 Monday night Antonio Brown caught six passes for 59 yards, and was targeted overall nine times in the 20-10 loss to the Bengals.

Brown though, wasn’t happy about the situation, and reports say that he and OC Todd Haley had a little confrontation about it on the sidelines.

Haley isn’t exactly the most well liked guy in the Steel City these days, and news about he and one of the most popular players getting into it doesn’t bode well for Haley.

Brown has never come across like a prima donna in the past, and with the offense putting up 17 points in two games, maybe it’s time someone goes after Haley.

The only way the Steelers offense it seems it can go at this point is up.

With Brown and Haley having it out about the offense, maybe it will finally signal Haley to get Brown more touches while other players can’t seem to get on the same page with Ben Roethlisberger.

Traffic and Parking Details For Steelers SNF Vs. The Bears
Roethlisberger Says Steelers Captains To Meet And Chat About 0-2 Start