Changes In The Depth Chart; Heyward To Start On DL, OT Adams To Sit 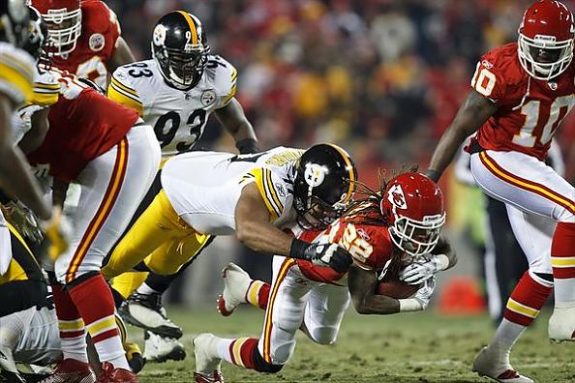 Staring a winless record in the face, the Steelers are looking ahead, and making a changes in the depth chart as well.

Former first-round pick defensive end Cameron Heyward will start on Sunday against the Jets, and awful LT Mike Adams will sit and either Kelvin Beachum or Levi Brown will both get playing time at tackle.

Rookie Vince Williams will be the opposite ILB with Lawrence Timmons.

“I like the attitude, demeanor and approach to work that the guys have taken,” coach Mike Tomlin said.

The moves for the defense Tomlin has to hope will help in terms of the club not getting a turnover in the first four games, and also giving up way too many big plays.

Against the Vikings in the loss in London, the club allowed four plays of over 50 yards, and missed a number of key tackles.

The team also has just four sacks, good for dead last in all the NFL.

Heyward was the third man in a four-man rotation at end behind Brett Keisel and Ziggy Hood.

Hood has been a disappointment, and with Heyward in the mix, it would appear that Hood’s playing time will go down quite a bit.

Maybe more pressure on Geno Smith and the Jets Sunday will stop the Steelers D from allowing big play after big play.

“We have to minimize the big plays,” Tomlin said.

“I think that has been an issue for us, we just need to get more solid in that area, minimize big plays and make people work to produce points against us.”

Tomlin did not rule out Brown starting at tackle Sunday, but at this point anyone other than Adams would be an improvement.

Guard Ramon Foster is still having issues with a strained pectoral muscle, and he will likely be questionable for the game Sunday.

It would seem that Beachum would start for Foster if need be, while Brown would take the spot of Adams on the line.