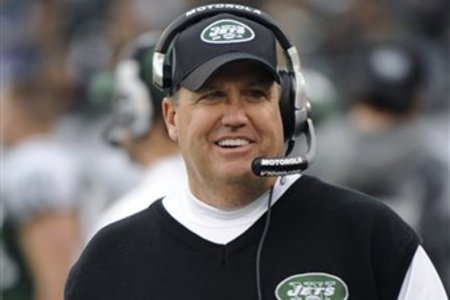 Today we chat with Andy Green, who is the editor at one of our sister sites – JetsGab.com – about the 3-2 Jets, this Sunday’s game, and his prediction for the game vs the Steelers.

1. What grade would you give Geno Smith in this early part of his rookie season?

B. Geno has had his ups-and-downs, however he continues to play without fear; forcing the ball downfield, and not settling for the check-down. One his main positives has been his ability to learn. He rarely makes the same mistake twice. A fact which was highlighted on Monday as he followed up his four turnover meltdown in Tennessee with a flawless performance against Atlanta. If Geno can put together back-to-back performances like his game on Monday he will have secured himself as the future of the Jets franchise.

2. Are the Jets coaches coaching with a sense of urgency with many feeling if they don’t win they won’t be back?

To begin the season it was tough to gauge what the coaching staff were thinking. They were obviously coaching for their jobs, but it wasn’t apparently obvious. However, now it turns out the Jets do look like possible play-off contenders they are in win now mode, and Rex Ryan’s bravado, which has been missing this year, has returned. So far, the coaching staff has been stellar, Rex’s defense is solid and Marty Mornhinweg has taken control of the offense, and is developing Geno Smith at an alarming rate. If everything continues on this path, the current Jets coaching set up is perfect, and they will survive.

3. How has the defense overcome the deal that sent Darrelle Revis to Tampa?

The defense has essentially changed what their strength is after they dealt Revis to Tampa Bay. In return for Revis the Jets received the Buccaneers 13th overall pick in the draft which they used to draft defensive end Sheldon Richardson. The current strength of the Jets defensive is their defensive front and Richardson is a big part of that.

The Jets are still looking for someone to actually step up and replace the hole in the secondary that Revis left. Dee Milliner, the other of the Jets first round picks, struggled early, and has since been out with a hamstring injury. Darrin Walls and Kyle Wilson have collectively filled in opposite Revis’s direct replacement, Antonio Cromartie, but neither are in the Jets long term future.

Amongst Jets fans few will say that they are disappointed with the deal, but most ponder how good the Jets defense would be now if they could have both Revis and Richardson.

4. Talk about the run game and if they pose a threat in the teams offense?

As the season started the Jets had just one healthy running back: Bilal Powell — hardly a known threat. However, Powell and the Jets running game has been very effective. They are currently ranked 11th in the league in rushing yards. The Jets also now have their full backfield. Chris Ivory is healthy, and Mike Goodson has returned from suspension. So I’d only expect the running game to get better as the season progresses. The Jets have also utilized the wildcat formation very well. ALthough it brings up a chorus of groins when they use it, it’s consistently averaged 4-yards-per-carry.

5. Final score prediction and why

Going into the season nobody would have given the Jets a shot heading into this game, however, after their win over Atlanta they are now 3-point favorites. This is an obvious trap game for the Jets coming off a big win. But, if you give Geno Smith time to throw, which he should have against a poor Steelers pass rush, he has proved he can carve up a defense. Add that to a dominant defensive front that will hassle Big Ben all-day. I predict that the Jets run away with one here.