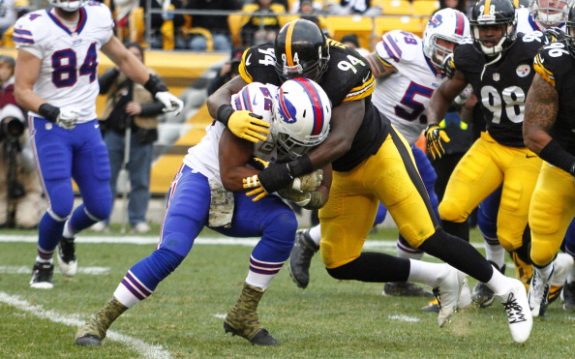 A week after allowing an all-time franchise-high 55 points and over 600 points, the Steelers defense clearly got the message this week.

The proud unit stepped up against the Buffalo Bills Sunday, and beat up rookie QB E.J. Manuel and the Bills to the tune of 23-10.

The Bills kicked a field goal on an early pick by Ben Roethlisberger on their first possession, but the only other Bills score came with three seconds left and the outcome decided.

Pittsburgh with the win pushes their record to 3-6 on the season, while the Bills fall to 3-7 with the loss.

The Steelers D held the Bills to 227 total yards, with Manuel going 22-for-39 with 155 yards with a touchdown and an interception.

The Buffalo run game of C.J. Spiller and Fred Jackson combined for just 78 yards on 20 carries, as the Steelers D put the clamps on the Bills.

Roethlisberger was 18-for-30 for 205 yards with a five-yard TD to Jerricho Cotchery and a first possession pick.

The Steelers run game didn’t do much, but Todd Haley stuck with it as Le’Veon Bell went for 57 yards on 22 carries, a 2.6 yard per carry average with a touchdown.

It wasn’t a pretty game by any means with plenty of no-shows at Heinz Field, but the Steelers did their part, scoring a win against a team that they should have beaten.