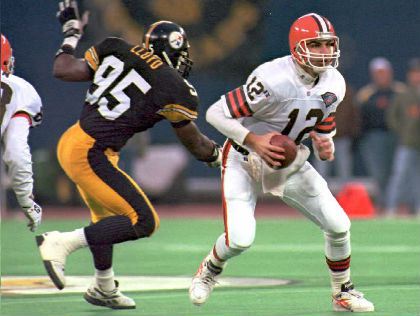 There’s been plenty to chat about, and for Steelers fans – cheer about – in the ‘rivalry’ between the Steelers and Browns over the years.

The Steelers have dominated the games between the two, and have a huge lead in the series. Today we take a fun trip back in time to see – in our opinion of course, the Top 10 Regular Season Games Between the two teams in Pittsburgh since 1990.

5. December 23rd 1990 Steelers 35 Browns 0 – The Browns were wrapping up an awful 3-13 season and seemed to treat the game like a July scrimmage, turning the ball over 3 times on their first 3 plays. Bubby Brister and the Steelers offense built a huge lead and put it on cruise control to take home a big win.

4. October 10th 2004 Steelers 34 Browns 23 – Ben Roethlisberger’s first start against the Browns, and he helped the Steelers pile up 401 yards of offense in an 11-point win. Ben threw a TD to Plaxico Burress and ran in his first career rush TD, and Duce Staley ran for 117 yards in the win in a season that saw the Steelers lose just one game in the regular season.

3. October 17th 2010 Steelers 28 Browns 10 – James Harrison crushed two Browns players (Josh Cribbs and Mohamed Massaquoi) on different plays, knocking them out of the game as the Steelers welcomed back Big Ben off a four-game suspension for a big win. Colt McCoy made his first NFL start for the Browns, and hung in early before getting an eduction late by a pumped up Steelers D.

2. November 11th 2007 Steelers 31 Browns 28 – One of the better comebacks in Heinz Field history, and it came against the Browns, as the Steelers come back from down 21–6 to take home a win after Ben Roethlisberger hit Heath Miller with the winning score late in the 4th quarter. Phil Dawson missed a 52-yard field goal attempt in the final seconds that would have tied it.

1. December 18th 1994 Steelers 17 Browns 7 – With two weeks before the 94 season ended, the 11-3 Steelers built a 14-0 lead to go on for a 10-point win to clinch the AFC Central title and also home field in the AFC over their biggest rival. It was a great win against the Browns, who were also very good in 1994, going 11-5 and beating Bill Parcells and the Pats in the playoffs. The Steelers would go on for a 20-point win over Bill Belichick’s Browns in the AFC Divisional Game three weeks later.

Who Is The Steelers MVP This Season?
A Steelers Poem: Keep Hope Alive