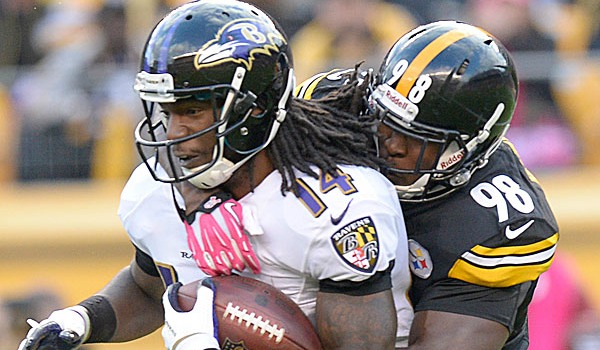 The Pittsburgh Steelers have had a busy Wednesday to say the least. Alongside of re-signing All-Pro safety Troy Polamalu to a three-year deal so that he can retire with the team he was drafted to, the Steelers also resigned Will Allen and made some key releases. Larry Foote, Levi Brown and Curtis Brown have been cut from the organization. The Steelers are starting to find ways to save money and a release of linebacker LaMarr Woodley is expected at any time.

For Levi Brown, his release was because of a failed physical. Brown was zero help as the Steelers traded for him last season in hopes of contributing to a struggling offensive line. Brown tore his pectoral muscle and he was placed on injured reserve before he played a down with the black and gold.

Curtis Brown’s release seemed to be caused from a lack of meeting expectations and injuries. Brown found himself on the injury report several times and never developed into the player the Steelers wanted when selecting him in the draft out of the University of Texas.

Foote will be greatly missed not by just the fans, but the locker room. Foote’s presence was definitely acknowledged on the team and he leaves as one of the last ones who was on the roster both Super Bowl XL and XLIII. Foote tore his bicep in week one of the 2013 season and found himself on injured reserve — leaving the Steelers with no signal-caller on defense.

The man who replaced Foote, rookie Vince Williams. The sixth-round middle linebacker from Florida State started in week two against the Cincinnati Bengals as the Steelers started the season 0-4. Williams quickly caught grip of the defense but the Steelers still finished at 8-8. The Steelers will now hope that Williams can continue replacing Foote but at a higher level of productivity.

Williams finished the 2013 season with 11 starts and 53 tackles as the defense’s “buck” linebacker. “I think the whole process was overwhelming. I didn’t really get comfortable until the second part of the season,” said Williams at the end of January.

Foote’s release could mean one other thing. That is, linebacker Sean Spence will be back into the mix after a two-year injury. The 2014 preseason seems like it will be Spence’s last chance to prove the organization he can come back from the nasty knee injury he suffered in a 2012 preseason game. When Colbert was asked about Spence, the general manager said: “He’s in the mix, but it would be naive to say he’s over the hump.”

Things are starting to take form for the Steelers in the 2014 offseason. The Steelers are not known for doing much in free agency which will start in six days, and it seems that will stay the same this year. However, the Steelers will be working on signing linebacker Jason Worilds to a long-term deal as the Steelers tendered the pass rusher earlier in the week. The Steelers are slowly making the changes they need to get back on top of the AFC North.