Steelers’ Art Rooney II not confident playoffs will expand in 2014 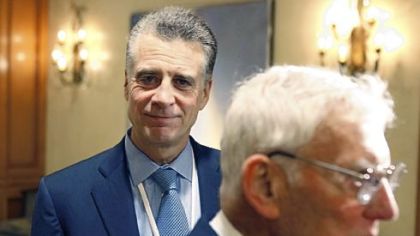 The NFL Owners’ Meetings in Orlando wrapped up with a news conference by Commissioner Roger Goodell where he made indications that the league may expand the number of teams entering the playoffs from 12 teams to 14.  Steelers President Art Rooney II didn’t agree with Goodell’s assessment from the meetings.  Goodell may have said, “It’s not out of the question,” but Rooney says there was no vote.

“We had a conversation about it…I don’t have a sense on how much support there is for it, although I think it has a chance to pass next year,” said Rooney.

“We have discussed it in various committees [including the Competition Committee], including broadcasting,” said Goodell.  “We had a full discussion on the floor with the owners and other executives this week.”  The idea is that with more teams competing for a playoff spot, the fan-excitement would increase.  Whether this is another marketing ploy to garner more money for the league or not remains to be seen.  Teams have not agreed to such a plan even as the Owner’s Meeting broke up.  The NFL Players Association also has not had any formal meetings with the league to discuss the idea.  “We have a meeting scheduled for April 8,” Goodell admitted.  “There are some issues that we still need to work through.”

One of the issues that would present itself is to what level the league would expand the playoff system.  Teams typically have players that are already broken down or trying to remain healthy to get to the current playoffs as they stand.  Whether players will want to add even more games is a big question.  If the league were to add more opportunities for teams to enter the playoffs, will NFL fans see teams with losing records get in on wild-card selections?  How will the league decide where to get the extra two teams to make 14?  Until everyone gets an opportunity to inspect the plan, a final decision is unlikely to be made.  And Rooney points out something very important – how much support is there for this, really?

Other News From 2014 NFL Owners Meetings

(The Competition Committee is headed by Jeff Fisher and Rich McKay)

Polamalu family continues to give back to community
For Steelers, salary cap issue next to be addressed