Polamalu family continues to give back to community 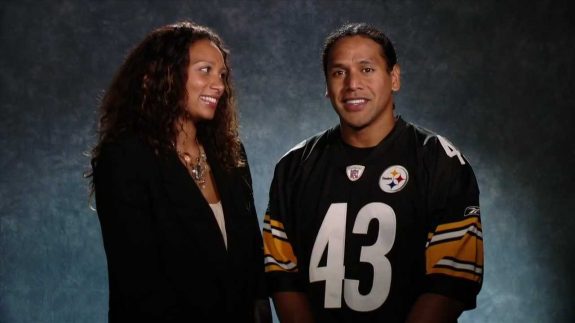 Troy Polamalu may be best known for his play in a Pittsburgh Steelers uniform. He gets a few playful jabs here and there for his Head and Shoulders commercials and YouTube videos. What doesn’t get highlighted as often, and should, is the fact that he and his wife, Theodora, are some of the most caring, philanthropic couples in the NFL. One could argue that it has nothing to do with professional football at all but a deep concern for the Pittsburgh area as well as American Samoa, children and veterans. This year, as they have in years past, Troy and Theodora Polamalu will continue to raise funds to give back to those they feel deserve a much-needed boost.

Their two main charitable foundations are the Troy & Theodora Polamalu Foundation, a fund of the Pittsburgh Foundation, that is the primary initiative of their family and the Harry Panos Fund for Veterans, named in honor of Theodora’s maternal grandfather who was a soldier during WWII.

The Troy & Theodora Polamalu Foundation currently focuses on humanitarian assistance to American Samoa, Pittsburgh Children’s Hospital, FOCUSNA Back Pack Feeding Program and the Fa’a American Samoa Camp. In 2009, American Samoa suffered devastation from a tsunami, which led the Polamalus to finding a way to provide permanent shelters. Polamalu is of Samoan descent and his ties to family are important to be him and his wife. Both are Greek Orthodox Christians and highly spiritual. Their two sons are named after Greek Orthodox Christian saints; Paisios and Ephraim. The Troy & Theodora Polamalu Foundation has also worked to improve the safety and playing conditions for youth and high school athletes.

In November of 2013, Troy wrote a piece for the Pittsburgh Post-Gazette about the hardships that those in American Samoa face every day. He wrote, “I am proud of my heritage and have happily taken advantage of every opportunity to educate my teammates and Steeler Nation about American Samoa….The unfortunate truth remains, however, that American Samoa is in economic distress.” He spoke of the values that Polynesian and American Samoans have in their culture – a sense of community, perseverance, hard work and respect. One of the most striking comments, Polamalu wrote, “…a higher percentage of American Samoans have fought and lost their lives for their country following the Sept. 11 terrorist attacks in 2001 than citizens from any other state or region.” These are men and women who dwell on an island comprised of around 55,000 people.

While their current causes are to specific issues, the Troy & Theodora Polamalu Foundation has retained the ability to remain flexible so that it can react to acute situations and needs should they arise.   This year, the foundation has teamed up with Total Sports Enterprises to hold a charity auction. That auction remains open until Friday, March 28th @ 10:00PM EST. There is still time to get involved.  Once you have registered for the event, you will receive an email confirmation and be able to bid on many items that will then be used as funds for the foundation.  Please click on the image below if you want to be a part of the Polamalus’ charitable giving.  (A new tab will open on your browser that goes directly to the event page) 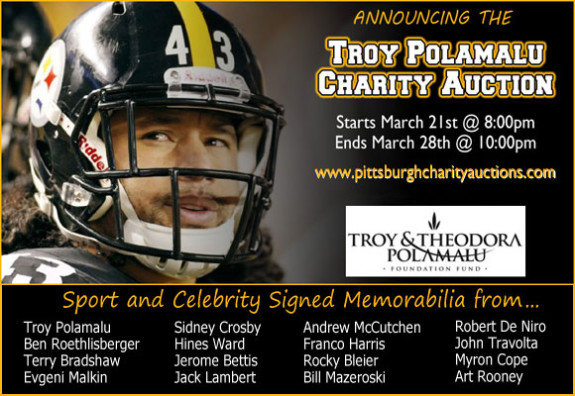