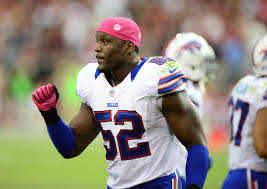 The Steelers picked up a much-needed linebacker by reaching terms on a one-year contract with former Bills starter Arthur Moats on Monday, Alan Robinson of the Pittsburgh Tribune Review reports.

Even with most Steelers’ front office personnel attending the annual NFL meetings in Orlando, Moats toured the Steelers’ South Side complex Monday and was able to reach an agreement. The Browns also showed interest in him.

With the Steelers thin at linebacker following the release of LaMarr Woodley and Larry Foote, the 6-foot-2, 250-pound Moats gives them some position flexibility.

He started 12 games at weak side linebacker for the Bills last season, and also was their top backup at middle linebacker, playing both outside and inside linebacker during his time in Buffalo.

Moats, a sixth-round pick from James Madison in 2010, has 141 tackles and five sacks during his four-year NFL career. Moats is 26.