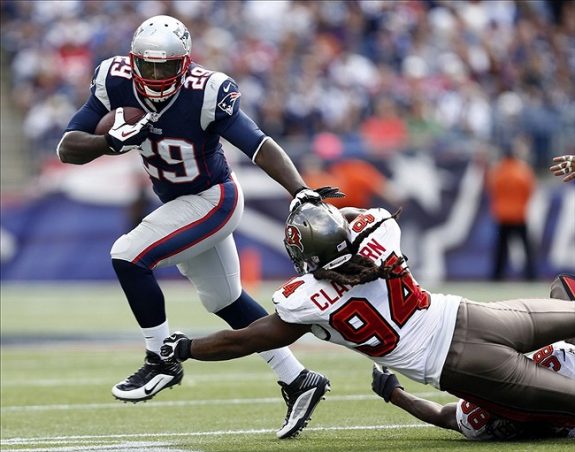 The Pittsburgh Steelers aren’t done looking for a veteran running back to supplement a rushing corps that currently is riding solely on Le’Veon Bell in his second year.  On Sunday, the Steelers are reported to host former New England Patriots running back LeGarrette Blount.  This after Maurice Jones-Drew visited this past week and walked away without a deal.

According to @RavensInsider, RB LeGarrette Blount will visit #Steelers

Blount, at 6-feet and 250 pounds is still relatively young for NFL standards at 27.  In 2013, Blount put up 772 yards and seven touchdowns for the Patriots.  Known for his powerful style and ability to break tackles, Blount could be a valuable addition to a Steelers offense that is lacking in depth.  Blount added 24 carries in the regular-season finale against the Buffalo Bills for 189 yards and two touchdowns.

In four seasons in the NFL, the former Oregon Duck rushed for 2,711 yards, averaging 4.7 yards-per-carry and 20 touchdowns.  Blount played for the Tampa Bay Buccaneers and the Tennessee Titans earlier in his career.  During his rookie season with Tampa Bay, Blount rushed for 1,007 yards and six touchdowns.

Whether Blount will ink a deal with Pittsburgh remains to be seen.  According to some league sources, the Patriots have continued to express interest in keeping Blount in New England.  Other teams have also expressed interest which means that the meeting on Sunday night in Pittsburgh could be just another stop unless the Steelers can get Blount to make a commitment.