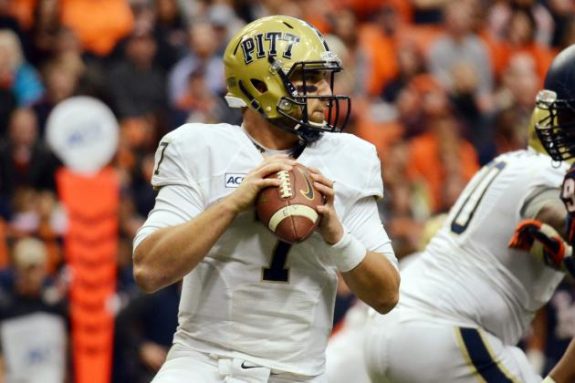 Pittsburgh Panthers quarterback Tom Savage is getting a lot of new attention as of late.  Interestingly, the Pittsburgh Steelers featured an NFL Combine video from NFL.com on their official website – leading some to wonder if the Steelers are interested in him.  While that is pure speculation, the Steelers drafted Landry Jones in 2013 and he has yet to show significant progress in the Steelers’ system.  Ben Roethlisberger also has no real backup in Bruce Gradkowski either.

While highly unlikely that the Steelers are going after Savage, the Pitt quarterback has some intriguing qualities that could see him selected higher in the 2014 NFL Draft than many predicted.  He will not make it anywhere near the first round and is mainly seen as a developmental candidate.

The interest in Savage grew following the March 3 Pro Day at Pitt.  A fifth-year senior in 2013, Savage has been somewhat of a college journeyman, but has the arm to get laterally downfield.  At 6 feet 4 inches and 228 pounds, Savage is considered a prototypical-sized NFL pocket passer.  Savage has played in a pro-style system, throwing from under center and in the shotgun, but has the ability to roll – mainly to his right.

Savage was a consensus national top-15 quarterback prospect (2009) out of Springfield Cardinal O’Hara High (PA).  Savage was recruited to play at Rutgers by then coach Greg Schiano.  As a true freshman, Savage had 14 touchdowns, 2,211 passing yards, but was only able to complete 52.3 percent of his passes.  In 2010, Savage had a hand injury that resulted in him being moved behind Chas Dodd and an eventual transfer to Arizona.

Due to NCAA rules, Savage did not play during the 2011 season and did not fit into Rich Rodriguez’ offense at Arizona.  That resulted in Savage once again transferring, to Pitt, and another NCAA restriction on playing time.  He returned as Pitt’s starter in 2013, throwing for 2,958 yards, 21 touchdowns and nine interceptions – completing 61.9 percent of his throws.  In a 59-56 victory over Duke, Savage threw six touchdown passes.

BLESTO and other scouting services gave Savage no draft grade due to what they felt was a lack of experience.  That being said, Savage has garnered new attention from NFL scouts due to his ability to get the ball deep down the field.  A prospect for sure, but an unlikely starter in any organization.  Savage most recently visited with the quarterback hungry Oakland Raiders.

Despite his never having played for Pitt before the 2013 season, Savage was named the team captain.  Behind a struggling offensive line, Savage was sacked but also showed an ability to get loose, scramble,  go through checkdowns and keep his eyes downfield when the pocket collapsed.  Size and arm strength could make quarterback coaches around the league see Savage as a player they can mold into a veteran.  Some may simply see that he needs more work than they are willing to invest.

The Steelers have not visited Pitt according to NFL pro day reports (NFL.com), but were present at the 2014 NFL Combine.  During Combine workouts, Savage posted a 4.97 second 40-yard dash time, a 1.72 second 10-yard split, a 27 inch vertical leap, and 8 foot 9 inch broad jump, posted a 7.33 second time in the three-cone drill and a 4.36 second shuttle time.

As for how rumors go, it is a curious thing to see the Steelers post such a video of Savage.  The probability is that they were simply adding content related to the Pittsburgh area – but then again, maybe they were sending a message yet to be decoded.  Savage wore the number ‘7’ at Pitt and in the video below, he does sort of remind you of another quarterback well-known to Steelers fans.  You decide.