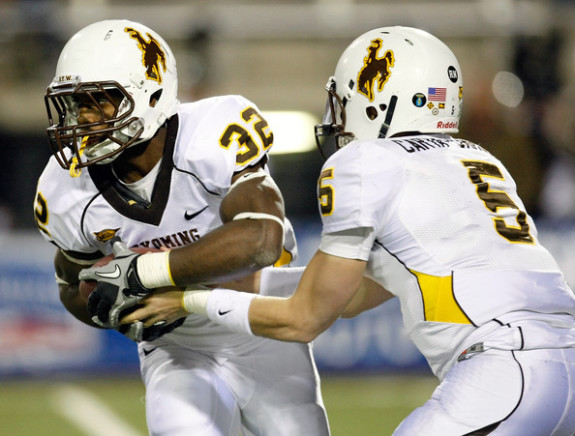 Alvester Alexander is something of an enigma. Signed by the Steelers on August 7, 2013 following releases by the Tennessee Titans and Indianapolis Colts the same year, Alexander is a dark-horse. He was originally signed by the Chicago Bears as an undrafted rookie free agent on April 29, 2012.

Alexander spent three seasons at the University of Wyoming, appearing in 38 games. He finished his career with 2,127 yards and 27 touchdowns on 477 carries. In that time, Alexander never missed a single game. He led Wyoming in carries in 2011 and was second on the squad in rushing and scoring totals. In 2010, he earned honorable mention All-Mountain West honors and led the team with 792 yards and 14 rushing touchdowns with a 66.0 yards-per-game average that ranked him fifth in the conference. That same year, Alexander set school records (rushing touchdowns) and five rushing touchdowns in a single game. Against Colorado State, Alexander was named the MWV Offensive Player of the Week for a record-breaking performance. He posted a 94-yard run against New Mexico, the second-longest rush in the nation in 2011.

A native of Houston, Texas, Alexander was a unanimous first-team all-district selection as a senior, running for 1,348 yards and 29 touchdowns his senior year. He recorded seven 100-yard rushing performances as a senior and scored three touchdowns in a single game four times that season.

Alexander wasn’t considered a high-draft option and playing for Wyoming did little to garner national attention from NFL scouts. In 2012, Alexander did an interview with Eric Galko of Optimum Scouting about his decision to enter the NFL Draft following his junior season at Wyoming – and the reason may surprise you.

“I have a talent,” Alexander told Galko. “I think I can make some team someplace, and hopefully can lead to a better situation for my family. There’s just a lot of stuff going on with my family.” For Alexander, his move was about helping out a father whose health was deteriorated to the point that he had frequent hospitalizations and home care that required Alexander’s mother to do most of the caretaking on top of a full-time job.

In 2012, NFLDraftScout.com rated Alexander as the No. 42 running back in the class of 2013. It was a draft full of rushing talent. Alexander got overlooked.

The fact that the Steelers signed Alexander may indicate that they want to give the young man an opportunity to prove himself in a new offense, a new city and a new organization. Whether or not Alexander will stay past training camp is hard to predict. He has never been the fastest, but he’s quick. He has never been the biggest, but he has shown strength and the ability to get down the field once he’s broken free of the offensive line. He has the ability to receive the ball as well. The jury is out on what Alexander will do, but this is likely his last opportunity to show that he can play at the NFL level.