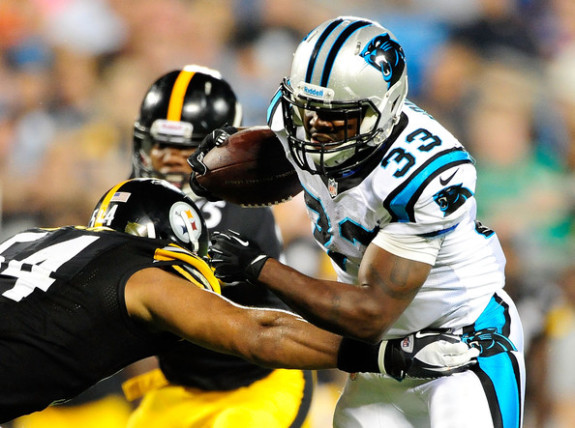 Tauren Poole isn’t a stranger to Pittsburgh Steelers football. In fact, Poole has played against the Steelers – in 2012 and again in 2013 – in a Carolina Panthers jersey. The Toccoa, Georgia native was signed as an undrafted rookie free agent by Carolina on May 11, 2012. That same season, Poole lost a step when he was placed on injured reserve with a rib issue. After spending time on and off of the practice squad, a step behind rushers like DeAngelo Williams and Jonathan Stewart, the Panthers waived Poole on November 26, 2013.

Poole didn’t even get a jump start on his NFL career due to the rib injury suffered in the 2012 preseason. He rushed for 56 yards and one touchdown on 11 attempts in two preseason games. Poole also make four catches for 37 yards before the injury.

Considered to be a medium-level prospect in the 2012 NFL Draft, Poole spent his collegiate football career with the Tennessee Volunteers. In 50 games (25 starts) at Tennessee, Poole rushed for 1,898 yards and 16 touchdowns on 423 carries. Nine times he gained 100-yard+ rushing efforts. Poole also posted 45 receptions for 343 yards and one touchdowns.

In 2011, Poole led the Volunteers with 693 yards rushing and five touchdowns. In 2010, Poole finished at the top of the team in rushing yards, with 1, 034, and 11 touchdowns on 204 carried. He tied for the Southeastern Conference lead with six 100-yard rushing games. Poole became the first player in 41 games at Tennessee to gain more than 100 rushing yards against Alabama (117).

Poole’s addition to the Steelers roster is seen by some to be an opportunity for the young man to prove himself or move on. With no word from the front office on whether the Steelers will seek another running back in the 2014 NFL Draft, they may be looking for Poole to show his level of conditioning and skills in their scheme at training camp before making any further decisions.