Steelers rumored to be interested in RB Andre Williams 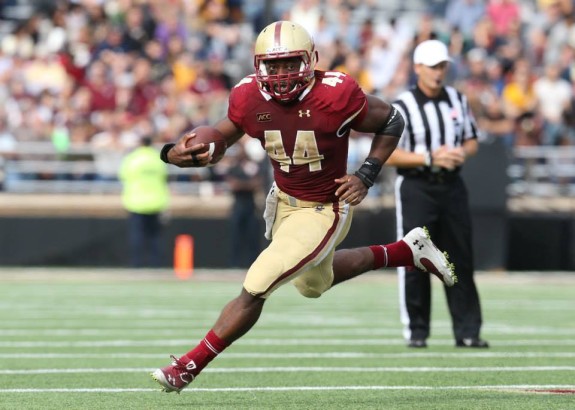 It doesn’t take a lot during pre-draft talk for rumors about who NFL teams may be interested in to get started, and in this case Boston College running back Andre Williams is a topic of speculation in regards to being a prospect the Pittsburgh Steelers are interested in.  Once an article was posted by a self-claimed Baltimore Ravens insider on The National Football Post, Steelers-related sites were abuzz.  There is a case that the Steelers need depth behind Le’Veon Bell and LeGarrett Blount, as we looked at the running backs on the current roster earlier this week.  Whether Williams is truly on Pittsburgh’s radar is something one can only speculate about.

Interest in Williams by any NFL team should be apparent.  The winner of the Doak Walker Award in 2013, Williams gained over 2,000 yards on the ground and scored 17 touchdowns.  Williams shattered the Boston College school record and the conference record for rushing yards in a season.  He was preceded in that category by only four former Heisman Trophy winners – Barry Sanders, Marcus Allen, Mike Rozier and Ricky Williams.  Considered a long-shot, Williams was considered for the Heisman Trophy in 2013 – a campaign that was bolstered by All-Pro Clinton Portis.  Florida State quarterback Jameis Winston ran away with the vote in a Heisman final that included three quarterbacks.

The Steelers have a tradition of looking at local kids and Williams is a Schnecksville, Pennsylvania native who only led the nation in yards (2,102), rushing attempts (329), yards per game (175.2), five 200-yard games and four 250-yard games; only.  Against North Carolina State, Williams had the top single game rushing performance of 339 yards.  Williams also accounted for 51.7 percent of the Eagles’ total offense.  All rumors aside, the 5 foot 11, 230 pound rusher looks more than promising.

Williams is projected to go as early as the second round in the 2014 NFL Draft.  That could put him out of the reach of the Steelers.  That is, out of reach unless the Steelers opt to forgo addressing defensive line and defensive backfield with their first two picks.  Although Williams looks to be a player that could make an immediate impact in the NFL, it has been suggested that his stock could fall to the third round in the draft.  That is perplexing considering his stats seem to point at a better ranking.

It could be argued that the Steelers haven’t had such a dominating, in-your-face, stiff-arming bulldozer on their roster since Jerome “the Bus” Bettis – as Williams appears to be on tape.  Williams ran behind one of the best offensive lines in college.  I’d love to be a fly on the wall come draft day, sitting close to Kevin Colbert and Mike Tomlin as they analyze their board.  Williams is an exciting back.

According to a report from the Baltimore Sun, Williams has drawn the “most interest from the New England Patriots, Cleveland Browns, Pittsburgh Steelers and the New York Jets, according to league sources.”  That the Patriots would be interested isn’t  surprising considering they lost Blount to Pittsburgh in free agency.  The Browns could use a boost in nearly every category of play.  The question remains whether the Steelers will take a chance or wait and see if Williams falls into their lap in the third round after they address more pressing needs.