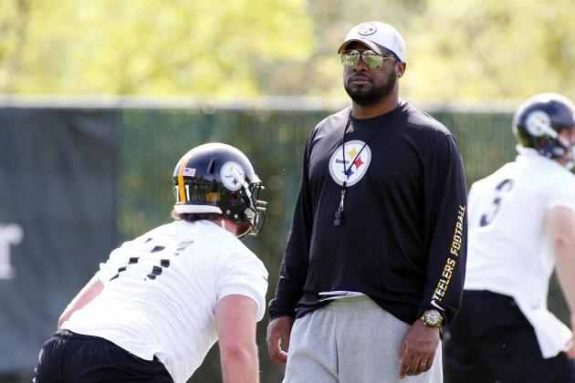 On Monday, the Pittsburgh Steelers returned to practice with a few lessons learned from their Saturday defeat to the New York Giants.  Head coach Mike Tomlin remained clear in his after-practice conference that the game showed him both positives and negatives that need to be worked out before the Steelers face the Buffalo Bills in their next preseason game.  This week of practice should give the Steelers a good idea of what guys are ready for the season and who is on the bubble of losing a chance to make the final 53-man roster, putting additional pressure on everyone to perform to their best.

Running back Jawan Jamison was waived from the team just ten days after replacing an injured Alvester Alexander.  No corresponding roster addition was announced, and it is safe to say that the running back duties remain unclear at this point behind Le’Veon Bell and LeGarrette Blount.  Dri Archer had some time at running back, but showed his speed and acuity in the first preseason game mainly by catching the ball on offense.  That leaves rookies Jordan Hall, Josh Harris, Tauren Poole and Miguel Maysonet on the roster behind them.

Regarding Monday’s practice, Tomlin called it a “good afternoon” of work.  “It’s important that we move on from our last performance and prepare for the next one.  It’s a big improvement week for us individually and collectively.”

Ryan Shazier (LB) worked into practice slowly and was limited and Matt Spaeth (TE) and Mike Mitchell (S) were both a bit banged up, but Tomlin didn’t expect long-term effects from their injuries.  Michael Palmer (TE, ankle) and Justin Brown (WR, thumb) were also limited.

Facing the Bills, the Steelers will see their offense play against a 4-3 defense, shaking up how practice will proceed this week.  “Obviously (we’re) working against an unfamiliar opponent [in Buffalo] and unfamiliar scheme in a lot of instances in a practice setting,” said Tomlin, “I just think (that) raises the level of urgency.”  Tomlin made it apparent that coaches will be putting Steelers players into uncomfortable, challenging situations to prepare and show what they can offer to the team.  “(Buffalo is) a god dance partner for us because they do a lot of things a little bit differently than we do,” Tomlin expressed.  “So it will be great to get in a practice situation and (for) us to hone our skills against some of those things…”

The Steelers defense will be preparing for a more mobile quarterback in E.J. Manuel.  Manuel started at quarterback for the Bills their final ten games in 2013 and logged 180-of-306 passes for 1,972 yards and 11 touchdowns. On the ground, Manuel scampered for 186 yards on 53 attempts for two touchdowns.  And while Manuel may not play much during the preseason game, the Steelers will also need to be prepared for backup quarterbacks  Thad Lewis, Jeff Tuel and even possibly fourth-string (and familiar face) Dennis Dixon.

Tomlin’s expectations are that with tough practices will come separation between Steelers players who are obviously ready to head into the regular season and those who don’t make significant improvement.  “If you’re going to make a move [as a player], it’s going to happen,” Tomlin said about this week’s players.  “There are no new surprises (regarding the) speed of the game…(If) somebody’s going to make a substantial move it’s going to happen this week.”

Tomlin’s biggest concern with what time the Steelers have remaining in training camp is keeping a sense of urgency running throughout the team and making the most of the time they have to work out specifics.  “I want to feel the same urgency for the moments that I ask the guys to feel…I try to feel the urgencies of the moment as opposed to just sitting around lamenting about the lack of time.”

Expectations for Steelers over Giants in preseason game one simple: Win
Punter Adam Podlesh Placed On Reserve/Did Not Report List