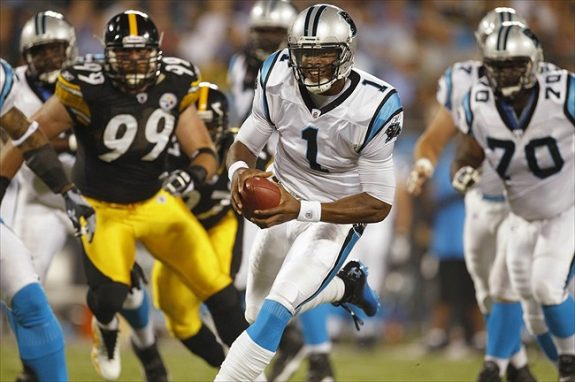 Cam Newton and the Carolina Panthers were successful in defeating the Detroit Loins this past Sunday (NFL Week Two). Newton has won 13 of his last 18 starts (including playoffs). If Pittsburgh is to prevent win number 14, a total team effort is needed from the Steelers to contain Cam Newton.

Newton clearly has potential to make a big play from anywhere on the field, so the Steelers offense will need to control the time of possession. Less time for Newton to operate could very well throw the Panthers offense off rhythm. Also, it will allow the running back combination of Le’Veon Bell and LeGarrette Blount to wear down the Panthers defense. The Steelers offense will need to be more aggressive in their play-calling in order to pick up steady yards on each possession.

When it comes to the point in which the Pittsburgh Steelers must kick the ball away, punter Brad Wing must be efficient in his hang time and getting great distance downfield. The special teams coverage must not allow the Panthers returners to gain efficient yards, in turn allowing the Carolina  offense to have a short field to work with.

When Newton is on the field the Steelers must provide an aggressive pass rush. Newton, who stands at 6’5, 250, is clearly bigger than the average quarterback. It will not be nearly enough just to attempt to arm-tackle Newton. The Pittsburgh Steelers defense has be more stout in stopping the run, which will force Carolina to become more predictable.

Outside linebackers Jarvis Jones and Jason Worlids must be able to pressure Newton and make sure they both don’t over-pursue, allowing Newton to escape and gain rushing yards on the outside. The secondary cannot afford to drop potential interceptions as they did three times during their Week One match against the Cleveland Browns.