Steelers: Getting The Chance To Stop J.J. Watt. 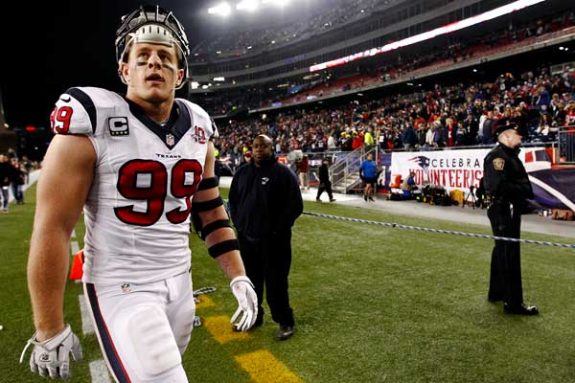 J.J. Watt has blossomed into a top ten defensive player in the NFL. From his ability to rush the passer, stopping the run and scoring touchdowns Watt has shown he can do a lot of things most defensive ends can’t do.

Watt can play defensive tackle and defensive end. Controlling Watt will mean being blocked by different offensive linemen. Three offensive linemen that come to mind are right tackle Marcus Gilbert, right guard David DeCastro and center Markice Pouncey – considering the fact that Watt is listed as a left defensive end.  These three linemen will have to show that can block Watt one-on-one.  When you include the fact that Watt plays from whistle to whistle and has shown the ability to tackle players 10 to 20 yards down field, he clearly also excels at batting down passes at the line of scrimmage, giving the Steelers a true test.

DeCastro has faced a tough test already this season blocking Tampa Bay Buccaneers defensive tackle Gerald MCcoy. Due to the fact that the Steelers are looking to run the ball at least 25-40 times, Decastro, Gilbert and Pouncey will have to drive Watt off the line of scrimmage over and over. Gilbert has underwhelmed as a pass blocker this season. Gilbert will be seen as the weak link on the offensive line going up against Watt. Watt has a habit of making splash plays. If the Steelers offensive line prevents the big plays from Watt, it will lead to a successful day for the offense.