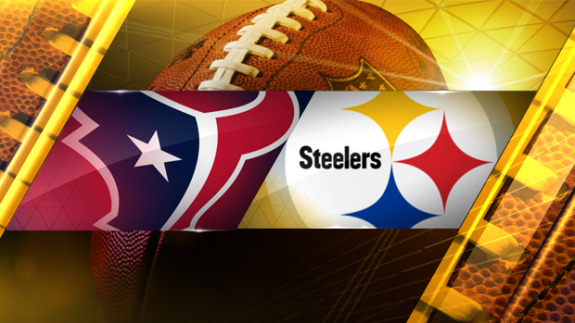 We ask three questions from Houston Texans fans about the Steelers vs Texans matchup:

Question 1. What are you most excited about for this Monday night game?

Katie Ellis: Seeing (Arian) Foster healthy again at running back. Now that his hamstring is 100 percent he can be more effective on stretch run plays

Question 2. Who do you feel is primed for a big game vs the Pittsburgh Steelers?

Reggie Tyson: Andre Johnson. Johnson has been the most consistent player the franchise has ever had. Johnson has the size and still has the speed and toughness necessary to be a elite receiver in the NFL

Katie Ellis: J.J. Watt. Watt has proven he is almost unblockable in one on one situations. With his ability to bat down, and intercept passes along with his ability to score touchdowns it’s easy to expect Watt to have a great game.

Question 3. What do you feel is the key to victory?

Reggie Tyson: Balance on offense. If the teams just tries to run way more times,than pass then they will become predictable.

Katie Ellis: Ryan Fitzpatrick can not afford to turn the ball over multiple times. He must play within himself,and allow others to make plays. When under pressure he needs to check it down as many times as possible.