Breaking down the Steelers defensive front seven through Week 10 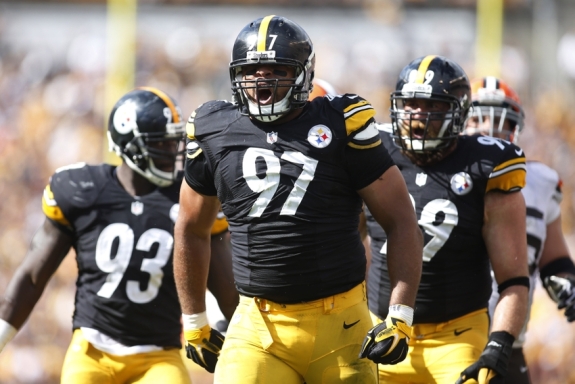 The Pittsburgh Steelers are 6-4 heading into Week 11 of the 2o14 NFL regular season.  Even with the winning record, the Steelers defensive line has had its ups and downs.  The Steelers defensive front seven has seen some improvement and some disappointments; even some who have regressed.  Here is how the big boys up front break down:

No.97 Cameron Heyward: Has been the team’s best pass-rushing lineman as he leads the defensive line unit with 4 sacks and 26 tackles. Heyward, many times this season, has proven he can not be blocked one on one. Going forward his ability will be counted on more as the defensive front continues to recover from injury.

No.96 Cam Thomas: Regular starter who has played many snaps at nose tackle and defensive end. Has recorded 16 tackles and a 0.5 sacks this season. Thomas has held it down while some of the younger guys have come along slowly.

No.62 Daniel McCullers: The big man has not played much. But when he has, he has commanded double teams on multiple plays. Has yet to record a sack but that should come with increased playing time. Going forward it looks McCullers will play more.

No.99 Brett Keisel: ‘The Bear’ has started several games this season. Keisel has been a great mentor while still showing he can still get it done on the field despite being past his prime. Has recorded 12 tackles,a sack,to go along with a interception. Going forward his leadership will be counted on all the more as the Pittsburgh Steelers gear up for another Super Bowl run.

No.91 Stephon Tuitt: The rookie was expected to start but has had some struggles early on. Has only recorded one sack this season but his playing time has increased each week since the Monday night game vs the Houston Texans. Has shown flashes of his bull rush ability. Going forward Tuitt just needs to continue to progress.

No.90 Steve McLendon: The starting nose tackle struggled early on in the season against the run. Had a dominating performance against the Carolina Panthers. Has missed some time due to injury. Going forward it seems rookie McCullers will receive more playing time. It will likely lead to McLendon being more fresh down the stretch. Has recorded 17 tackles and a sack so far.

Steelers vs Titans: Five Things To Watch For in Week 11
Agreeing and disagreeing with Steelers coach Mike Tomlin