Five Takeaways Following the Steelers Win Over the Chiefs 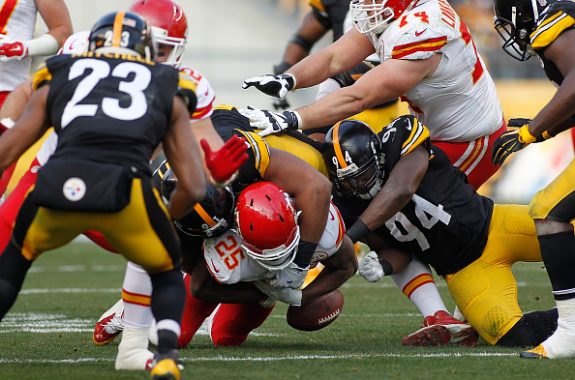 From the fans, to the players, to the coaches, everyone Sunday afternoon at Heinz Field stepped up, and because of it for the first time since 2011, the Steelers are headed to the postseason.

The team has not played a true playoff affair since January 8th, 2012 and it was a stunning defeat at the hands of Tim Tebow and the Denver Broncos.

It was a long two years without a playoff game, and now we know the black and gold will play at least one game, and it could even be at home if they can take care of business next week against the Bengals.

With that, here’s five things to take away from the team’s third straight win, a huge one over the Chiefs 20-12 that at worst clinches a wild card slot in the AFC.

5. Best Game of the Season by the Defense – Yes I know the Chiefs are not the offensive juggernaut of a club like the Broncos or Patriots, but they do have a very, very good RB in Jammal Charles, as well as a decent to above average QB in Alex Smith. The Steelers D had a great day, piling up a season high six sacks, forcing a key fumble, and holding Charles to 29 yards on the ground and 48 in the air. Overall holding KC out of the end zone proved huge, and with the way James Harrison and Cam Heyward are playing, this D finally looked like the defense Steelers fans have been waiting for during most of 2014.

4. The O-Line Deserves a Lot of Credit – I love the aggressive play calling of Todd Haley early in the game, and it looked as if as the game moved along, the O-line got more and more of a push and did an excellent job protecting Ben Roethlisberger. “Big Ben” took one sack, and was upright for 25 pass attempts during the game, keeping dangerous Justin Houston (who did have their only sack) off Ben most of the day. O-Line coach Mike Munchak deserves a lot of kudos for getting the line to play better and better, and while Le’Veon Bell only rushed for 63 yards, overall they got the key push when needed, and they should get a lot of credit for that.

3. The Steelers Need a Home Game – Following the loss to the Saints, the team looked down the barrel of four key games, two on the road and two at home. At this point, they are 3-0, and have the Bengals, who have to play a tough Monday night game at home vs the Broncos coming up next. The division title, the first if they can get it since 2010, is theirs for the taking, and this team would be well advised to go out and get it in order to play a home game in the wild card round. If this club thinks they can hang with the big boys like Denver or New England, winning the division gives them a much better shot at knocking one of those two teams off. Sure they did it all on the road in 2005, but let’s be realistic, a home game would be an easier road to playing in Super Bowl than playing three on the road to get there.

2. Harrison playing like 2008 – Who would have ever guess here on December 20th we would be talking about just how well James Harrison, a guy who wasn’t even on the roster for the first few weeks of the season, would be playing. After missing the Falcons game, he was on tear today, making plays all over the place and pushing around former first overall pick Eric Fisher. The team needs his energy and high level of play in at least the next two weeks, and his game against the Chiefs looked more like a highlight film out of 2008 season when he seemed to be at his very best. He’s been excellent for most of the time he’s been back in 2014, and the club needs to have him back in 2015.

1. The Tomlin Bashing Has Rightfully Gone Away – When this team was 3-3 and things week by week were very up and down, putting the heat on coach Mike Tomlin and of course his OC Todd Haley was the ‘in’ thing to do. Know that the Steelers have won 7 of 9 and are in the postseason, that talk, again rightfully so, has gone away. Face it, Tomlin has done a good job with a team that at times clearly didn’t play great football during the first month and a half of the 2014 season. The 31-10 loss to Cleveland, the loss to the Jets, and the bad home loss to the Saints seemed to be the perfect time for people to pile on Tomlin, but in the end, he’s done a good job with a team that a lot of the ‘experts’ felt would go .500 or maybe a game above. Want to compare how good he’s been? Look at Cleveland, who pounded the Steelers by 21 points on October 12th. With a rookie head coach in Mike Pettine they sat at 6-3, and were the darlings of the NFL. Fast forward to today, and when they wake up tomorrow they will be 7-8, losers of 5 of their last 6. Tomlin gets a strong nod as a guy who has made sure this group has done was they were supposed to do and stayed focus – even in tough times.

Steelers Gab POW: Lawrence Timmons is man holding center of defense
Today is the 42nd Anniversary of ‘The Immaculate Reception’