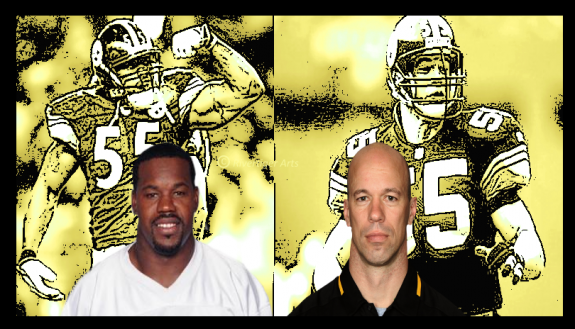 The fact that the Pittsburgh Steelers promoted former players Joey Porter and Jerry Olsavsky to linebackers coaches within the organization isn’t surprising.  While Porter will coach the outside linebackers, Olsavsky will focus on the inside linebackers.  With their history within the Steelers franchise as players and coaching assistants, the hope is that the number ’55’ they both shared brings decisive improvement to a squad that has struggled from a player personnel perspective.

Porter was drafted by the Steelers in the third round (73rd overall) of the 1999 NFL Draft out of Colorado State and gave eight seasons with Pittsburgh.  On his college career, Porter registered 20 sacks in two seasons on the defensive side of the ball.  Porter’s name is still in the record books at Colorado State as fifth on the school’s all-time sacks list.  His 14 sacks in 1998 are the second-most in a single season in school history.  For his NFL career, Porter played in 188 games, registering 98 sacks, 721 tackles, 12 interceptions, 25 forced fumbles, nine fumble recoveries, a safety and three touchdowns.  Porter’s 60 sacks while with the Steelers has him listed as the fifth highest in that category in franchise history.  Porter was named to the NFL’s All-Decade Team for the 2000’s as a four-time Pro Bowl player and All-Pro.  Porter was the first NFL player in league history to reach 70 sacks and 10 interceptions on his career and only NFL player to register at least five sacks per season from 2000-10.  Porter earned a Super Bowl ring with the Steelers in Super Bowl XL.

Porter was an extremely talented outside linebacker and was notorious as a big talker and tougher hitter.  Sometimes viewed as a villain by opponents, Sports Illustrated named him the “Most feared player in the NFL” in 2006.  Demonstrating that he was indeed tough and not just a guy who got chatty during games, Porter returned to the playing field three weeks after being shot in the thigh outside of a Denver sports bar (2003) to record four tackles and a sack against the Cincinnati Bengals.  Porter was often a topic of controversy due to vocalizations during his time as a player, but often was overlooked for his charitable works and kids.  In 2013, Porter was an undergraduate student assistant football coach at Colorado State while completing his college degree in liberal arts.  Porter was an assistant defensive coach for the Steelers during the 2014 NFL season.

Olsavsky played college football at Pitt where he was a first-team Kodak All-American as a senior in 1988, the same year he made 129 tackles.  He was the first Panthers defensive player since 1976 to record more than 100 tackles in three consecutive seasons.  Olsavsky spent time coaching at Youngstown State University and the Univeristy of North Carolina and well as Duquense University and Chaney High School.

Both Porter and Olsavsky bring the kind of talent and experience the Steelers need to develop players like Jarvis Jones, Arthur Moats, Ryan Shazier and Sean Spence.  While the status of Jason Worilds and James Harrison are still up in the air, Porter and Olsavsky have the potential to turn the Pittsburgh linebacking corps into what it once was – dominant.

The Steelers signed three outside linebackers to futures contract; Roosevelt Nix (Kent State), Shawn Lemon (Akron) and Howard Jones (Shepherd).  Similar in stature and nature to Harrison, Nix was lined up at fullback with the Atlanta Falcons as an undrafted rookie free agent in 2014, but the 5’11” bruiser proved to have a red-hot motor and ability to get leverage naturally.  Lemon spent time in the CLF after going undrafted in 2014, but finished with a 13-sack season who forced eight fumbles.  At 6’2″, Lemon has a strong bull rush and is quick in pursuit.  Jones can be explosive and has a season on the practice squad under his belt.  All three could become dominant under the tutelage of Porter and Olsavsky.  If anything, they will push first-round draft selections Jones and Shazier to the next level of play.

Steelers Promote Porter As OLB Coach; Olsavsky As ILB Coach
Chapman: How the Steelers Should be Built