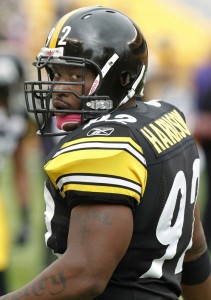 Public Retraction:  Unfortunately a source that has proven reliable in the past released information prematurely. In the sports world, reliable sources are key. Due to the timing of the release of info, our team rolled the dice. In this instance, we were only able to get full verification early this a.m.  We strive to provide the most accurate information possible and apologize for this unfortunate event.  Here is the verification we received today from Burt Lauten, PR manager of the Steelers: 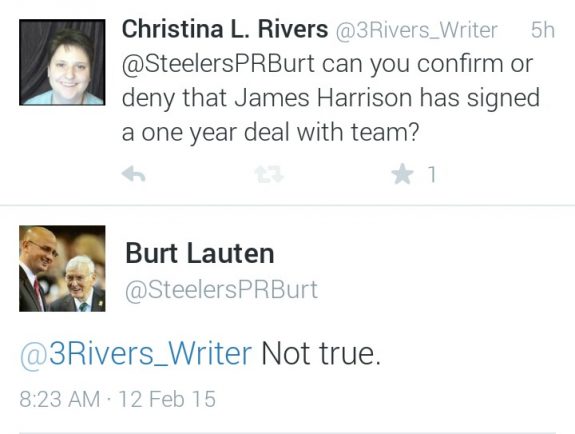 He ended the year arguably as the Steelers best defensive player.

Because of that, reports are the 36-year-old (he’ll be 37 May 4th) has agreed to a deal to come back to the Steelers on a one-year deal.

Last season he returned to team after walking away and retiring for just 18 days. He came back in week five after the team was bit hard by the injury bug. The team lost linebackers Jarvis Jones (right wrist) and Ryan Shazier (right knee) in a week four win at Carolina, prompting the team to get on the line and offer Harrison a deal.

The deal that brought him back was “a simple and easy decision” for the Steelers according to coach Mike Tomlin, who probably thought a return for him in 2015 was an even easier choice based on how he played in 2014.

He put up 5.5 sacks in 2014, and was a force again on the outside for the Steelers. With the uncertain return of free agent Jason Worilds, getting Harrison back, even for one season, makes even more sense.

Harrison’s most memorable play will go down as the one that was a huge part of the Steelers last title in 2008, as he took a Kurt Warner pass and returned it 100 yards for a touchdown to end the first half in the eventual Steelers 27-23 win over the Arizona Cardinals.

New contract or not, Ben can be better in 2015
Potential Prospects For Steelers To Evaluate