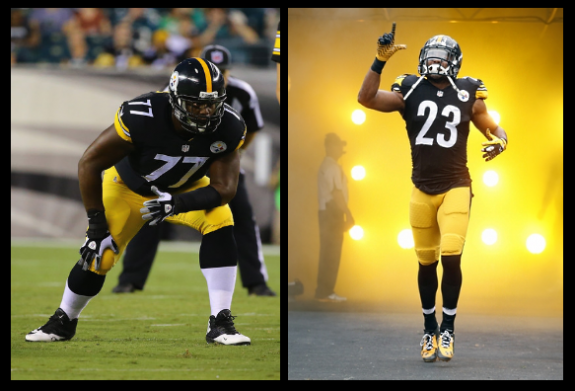 Wednesday was a busy day for the Pittsburgh Steelers.  Despite an expected NFL salary cap that is expected to be $10M more this season (to $143M), the Steelers restructured the contracts of Marcus Gilbert and Mike Mitchell, opening nearly $6.2M in salary cap room for 2015 per the Post-Gazette.

Though some have speculated that the moves would allow the Steelers to offer quarterback Ben Roethlisberger a contract extension, it is more likely that Pittsburgh will now target Arthur Moats, cornerback Brice McCain and other unrestricted free agents when the period opens on March 10.  Roethlisberger’s extension will still save the team cap room as the Steelers are likely to turn at least part of the $11.6M due this year into a signing bonus.  Gilbert and Mitchell won’t lose money on the deal, but instead the freed money allows the team to offer roster bonuses and signing bonuses.

According to Ed Bouchette, the Steelers have only spent 89 percent of the money they are required to use over the course of four seasons (2013-16) and already have two seasons in the books.  The collective-bargaining agreement that was put into place in 2011 dictated that all 32 NFL teams must pay out a cash total of 89 percent in all four cap years – shortfalls after the 2016 season would be required to be distributed payments to players on those rosters during those seasons even if they’ve left the team.

The moves signal that the transition period has already begun in Pittsburgh.  It is expected to be a busy next few weeks as free agents test the market, including outside linebacker Jason Worilds.  The team is allowed to re-sign their own free agents before the beginning of the open signing period, and while it has yet to be verified, ESPN has hinted that Pro Bowl center Maurkice Pouncey may be open to restructuring a deal with the team to aid in bolstering a squad that has depth issues on both sides of the ball, although the defense is the focal point.

The Steelers have spent three of their last four first-round picks in the NFL Draft on the defensive side of the ball.  With Keith Butler moving to defensive coordinator and head coach Mike Tomlin a former cornerbacks coach, it is likely the duo will get defensive assistants Carnell Lake and Joey Porter involved in talent discovery and analyzing free agents that will improve the roster.

Per Spotrac.com, the projected salary cap space as of February 1, for the Steelers, was the 27th most with -$4.1M.

Could the Steelers Lose Players to the Titans Because of LeBeau?
Does it make sense for Steelers to go safety first?