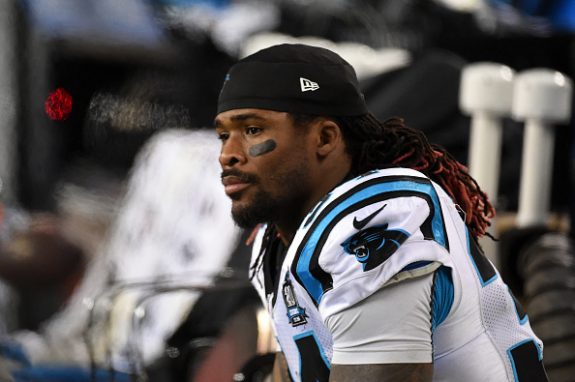 Last season the Steelers got caught with their pants down after running back Le’Veon Bell was injured in the regular season finale vs the Bengals.

They are determined not to let that happen again, and may have a player in mind as the perfect backup for their roster in 2015 – that being free agent back DeAngelo Willilams.

The former Panthers bruiser was just this past offseason, he’s 31 years old and while he may not have a ton of gas left in the tank, he would help a RB core that is weak at best after Bell.

The release from Carolina saved the team around $2 million worth of room.

Williams has rushed for over 6800 yards in his career, and last season played in just six games due to injury, going for just over 200 yards.

In his last healthy season, Williams ran for 843 yards and three touchdowns in 15 games in 2013.

His best season came in 2008 when he was a monster, going for 1515 yards and 18 touchdowns as the Panthers won the NFC South before falling to the Cardinals in the NFC Divisional Playoffs.

Williams would fit well with the Steelers since it appears the team won’t have Bell for the first two games due to a suspension after his arrest last August.