Cover One: Who Will Step Up And Be The Number One Steelers Corner? 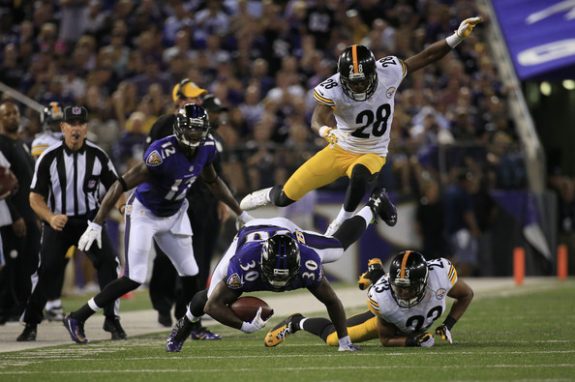 Heading into the 2015-2016 season the main concern for Pittsburgh Steelers fans clearly is the cornerback position. It is yet unknown which cornerback will step up and take on the top wide receiver of the opposing team each and every week. There are several candidates to look at as none of them are set in stone to be number one.

One player that has to come to mind is Cortez Allen.  As bad as he was last season, Allen has no choice but to improve this upcoming season.  Allen was paid big money, and even though he has not yet lived up to the contract, the fact that the Steelers did not release him or trade him shows the team still has faith in him. Allen could stand to be a bit more physical in press coverage and not hesitate when he wants to make a jump on the football.  Allen’s athletic ability is not to be questioned, but it is the mental part of his game he must grasp. There was a time when longtime starter Ike Taylor was benched late in the 2006-2007 season, and it turned out to be the best thing for his career.  Allen’s may turn out to be a similar story.

William Gay has defined consistency over the past two seasons with his play. Never known as a flashy player, Gay has contained some of the best wide receivers in the game with his sound technique.  The Steelers would prefer if he played more in the slot considering the fact he lacks elite speed. Gay has the tackling and leadership ability of a number one cornerback and was the the number one cornerback for the Steelers last season by default because of the disappointing play of Allen.  Best case scenario is Gay being the number two or three cornerback.

There is also a strong possibility that a cornerback could be drafted to be the day-one starter. Certain candidates include Trae Waynes, Marcus Peters, Quentin Rollins or Josh Shaw.  If any rookie cornerback proves in training camp and the preseason that they are physical, and understand zone coverage, it will put them ahead of the curve.

A capable rookie starter, a bounce-back season from Allen, paired with Gay playing the slot and a feisty capable backup in Antwon Blake – the cornerback position could evolve into an above average group.

Between The Hashmarks: Fan Take on Tomlin, Steelers Stance On Cornerbacks
Blast Furnace: Prom Date Rule has nothing to do with toughness