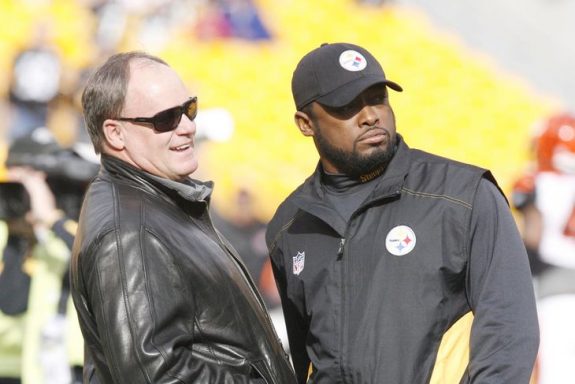 Pittsburgh Steelers head coach Mike Tomlin met with members of the press on Tuesday from the NFL owners meetings underway in Phoenix, Arizona.  Questions about the state of the Steelers as a team and franchise, particularly the thinking behind the upcoming 2015 season, were at the forefront.  Tomlin expressed that he feels the Steelers are headed in the right direction and that regardless of what others may see outside of the organization, he is comfortable with the process underway.

The Steelers had good offensive production during the 2014 regular season, averaging 411.1 yards and 27.3 points per game.  Pittsburgh earned their first AFC North title since 2010 mainly with what many NFL insiders consider the best receiver-quarterback-running back trio in the league.  Antonio Brown, Ben Roethlisberger and Le’Veon Bell boosted the overall production of the offense, especially in the second half of the season.  Bell finished second in the NFL behind DeMarco Murray in rushing yards with 1,361.  Brown finished the 2014 season with 1,815 yards receiving on 138 catches. Brown set franchise-best marks (during the regular season) by leading the league with 1,698 yards receiving, 129 receptions and 13 touchdowns.  Roethlisberger, who recently signed a five-year extension with the Steelers, had arguably his best regular season in the league, throwing for 4,952 yards and 32 touchdowns with only nine interceptions.

Although Bell is facing a two-game suspension after violating the league’s personal conduct policy, the Steelers will have all of their main starters return on offense with the addition of running back DeAngelo Williams.  Williams was the all-time rushing leader for the Carolina Panthers.  “Obviously the acquisition of DeAngelo Williams helps us in that regard,” Tomlin said in reference to Bell’s penalty period, “but it goes beyond that.  We needed fortified depth at the running back position and he definitely fits the bill.”  Tomlin was open in expressing his confidence that the Steelers offense would be successful but has the opportunity to be better.

As for the NFL rule book that is being discussed, a nearly 100-page document, Tomlin said that the system is complex and often unclear.  “I think (all coaches) search for clarity and simplicity,” Tomlin said of the rules, “but I don’t know that that describes our game in today’s time, particularly with the inclusion of some of the technological advances that have become very much part of our game.  I think what we’re looking for is clarity and as much as we can find that, I think that’s what we aspire to.  I don’t know that that ends up with simplicity, and that’s just the reality of it.”  Tomlin admitted that regardless of his nearly 16-year study of the rule book, he doesn’t know every aspect of it.  “I’m not going to pretend that I know every crevice…we were talking in the coaches’ meeting here the other day, and the reality is that we continually have discussions during the course of games about the specifics of the rules.  It’s difficult to have a detailed understanding of it at all times.”

One thing Tomlin refused to address was the status of Troy Polamalu.  “I’m not getting into (that),” Tomlin said. “I think that’s been documented.  Art (Rooney II)’s made comments.  I don’t need to add on to that.”

Tomlin also did not want to “get into specifics” regarding the departure of Dick LeBeau.  “Dick’s been (in Pittsburgh) a long time, and we had a great deal of success,” Tomlin said.  “Just know we had a great deal of love and respect not only for him as a man, but what he brought to us.  He’s moved on, and we feel we have a very capable man in Keith Butler.”

Tomlin’s familiarity with Butler is something that he feels comfort in.  “I got a great deal of comfort and continuity from that standpoint and I’m also looking forward to the impact he can have in terms of putting his spin on what we’ve been doing and what we will continue to do,” Tomlin admitted.  “I’m excited how that can make us different and more competitive moving forward.”

Butler will have his hands full despite Tomlin’s assurances.  The Steelers run defense was ranked sixth in the league during the 2014 regular season, but allowed an average of 100.3 yards per-game.  They allowed rushers a per-carry average of 4.4 yards, ranking them the seventh worst in that category on defense in the league.  With only 33 sacks, the Steelers saw their lowest total in two seasons since the 1989-90 campaign.  “Our goal is to be the very best, or, at least, be in that discussion,” Tomlin stated.  “That’s our intention, to be back in that discussion.”  As for the process, Tomlin said, “I just know that change is part of football, particularly at our level. And with change comes some positive things.  What also comes is some potential negative things.  It’s our job to work to minimize the potential negatives associated with change.”  The biggest part of that change includes a roster on defense that has nearly been completely stripped.

Overall, Tomlin wouldn’t dismiss his optimism over the direction the team is headed.  “I’ve just got a great deal of respect for the process and building it,” Tomlin said.  “I look forward to each day and each and every opportunity to enhance what we are.”