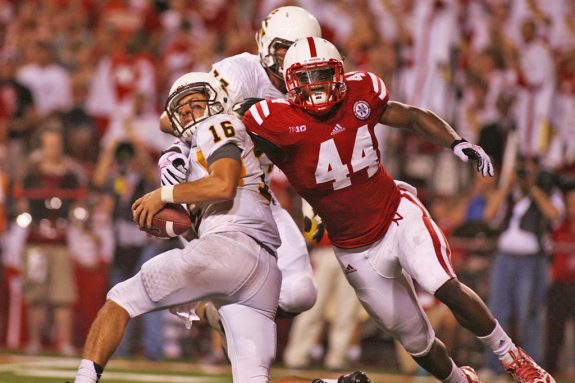 Randy Gregory is a 6’6, 240 lb. man child from the University of Nebraska. He is projected to be a top-10 pick in this year’s NFL draft. Some organization will invest millions into his potential. In his first year for the Cornhuskers he had 10.5 sacks. The way the NFL game is played today edge rushers are at a premium. You have to get guys that can rush the quarterback. Randy Gregory, talent wise, has the skills to do that. All Gregory had to do was go to the Combine and run a respectable 40 time and he was guaranteed a top-10 draft spot. He risked it all for marijuana.

A fluke positive drug test during the most important interview of his pro career speaks volumes of his decision making. Gregory may end up being a great productive member of society one day. Who am I to judge? We all make mistakes, but as of now he can’t be counted on. He could go on to be an All Pro player and a future Hall of Famer, but if he was still on the board when the Pittsburgh Steelers select at 22, I don’t care how talented he is and whether he fits a need for the Steelers in the worst way. His immaturity might have just cost him millions of dollars and a top spot in the Draft.

People in Pittsburgh know this story all too well. If it sounds familiar – the same thing happened to Mike Adams who’s turned out to be a bust thus far on the offensive line. Adams, too, was considered a first round prospect and ruined his chances with a failed drug test right before the Combines. Adams wrote a letter to the Steelers and Mike Tomlin felt that he was sincere and apologetic and took a chance on the young player in the second round.

I fully believe in second chances, but in this case Pittsburgh has to learn from its mistakes. Kevin Colbert has to get this draft right and the Steelers need major help on defense.

In the 2012 draft, Pittsburgh took a chance on Alameda Ta’amu, Chris Rainey and Mike Adams. All of those guys had off the field issues and all failed miserably for the Steelers. Adams is the only pick that’s on the Steelers roster as we speak. These past draft mistakes could be the very reason why it’s been tough for the Steelers to develop players recently.

My advice to Kevin Colbert is if Randy Gregory is on the board at 22 – pass.