Steelers may find Heath Miller replacement in the draft 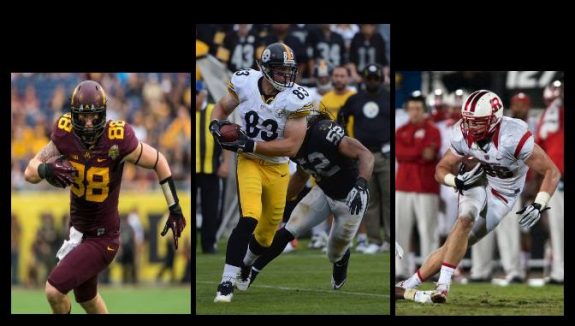 Heath Miller has been a steady receiver and blocker for the Pittsburgh Steelers for the last decade, but with every football player, there comes a time in which the scouts and coaches begin to look for a replacement. In the 2015 NFL Draft, there is plenty of talent to invest in at the tight end position.  This would be an excellent opportunity to groom a young player and allow Miller to mentor him.

Maxx Williams (University of Minnesota) is considered the best tight end in the draft by many scouts and analysts. Williams has shown above average run-after-the-catch ability for a tight end and also has the athleticism to split out wide and create matchup problems for linebackers, short safeties and cornerbacks. At 6’5″ 250 pounds, Williams is an instant threat in short-yardage plays and in goal situations even if he has trouble picking up the offense right away. Williams’ above average route running ability should make him evolve into a reliable third-down option. One area of his game in which Williams needs to work is his ability to block blitzers one-on-one. Miller should help him in that area starting in off-season training activities.

Another player to keep an eye on is Tyler Kroft, a 6’5″, 240 pound tight end out of Rutgers.  Kroft has the body frame that would allow him to add ten more pounds of muscle.  Kroft has shown the ability to be a good in-line blocker and can outrun linebackers. Kroft plays with a nonstop motor and can also block out of the backfield.  In college, Kroft showed quickness out of his three point stance and quickly ate up the cushion given in a zone defense. One weaknesses of Kroft’s is that he will not outrun most NFL defensive backs, so his vertical game will likely be limited to down the seams.

Whichever tight end that is selected by the Steelers will not have to deal with the pressure of being a week one starter.   Miller will be a great mentor on and off the field.  Miller clearly has a lot left in the tank so don’t expect a major deduction in his playing time.  Any tight end selected could also be a potential replacement for Matt Spaeth.