Steelers: Searching For The Next Interior Offensive Line Gem 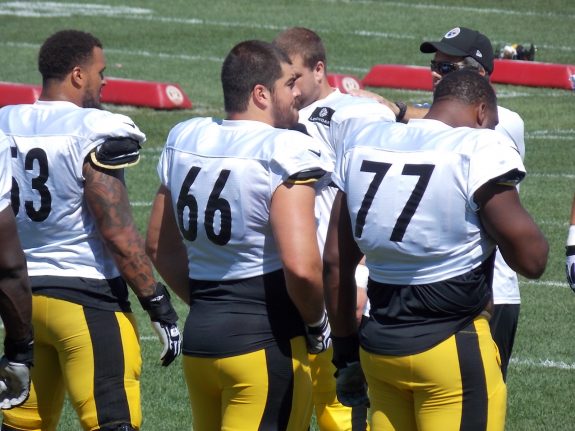 Offensive guard Ramon Foster has been a consistent stable player for the Pittsburgh Steelers for the past six seasons.  Foster, an undrafted player out of the University of Tennessee, will be a free agent after the 2015-2016 season.  With Foster approaching the age of 30 it may be the right time for the Steelers to look for his replacement.

As the years have gone by, offensive guards have not been selected (overall) as early as they used to be. If a guard is considered to be a top prospect he likely is drafted late first round to early second round. In this year’s NFL draft, no guards are expected to be picked in the first round which works well for the Steelers.  The Steelers crave guards who can play both positions and some center as well. Maurkice Pouncey, Cody Wallace, Kelvin Beachum, David DeCastro and Foster fit that mold.  When searching for a guard  in this draft, the Steelers will be looking for a player that is able to pull as well because running back Le’Veon Bell has excelled on counter and stretch runs.

In the 2015 NFL draft, certain prospects come to mind such as Quinton Spain who the Steelers have brought in for a visit out of the University of West Virginia. Prospects who have not visited with the Steelers that could possibly be drafted are: Arie Kouandjio, whose older brother Cyrus Kouandojio plays for the Buffalo Bills, and Ali Marpet.

Kouandojio does a masterful job of picking up blitzes, dominates bull rushers and excels in the run blocking game.  Kouandojio has improved greatly, mirroring in pass protection, and can get to the second level play after play.  Kouandojio is the guard you want to run behind on a third-and-one and fourth-and- one. Kouandojio needs to improve his pad level, and pre-snap movements, and could stand to lose five to ten pounds.  A couple weeks of preseason workouts and training camp should solve that problem.

Marpet is an impressive Division Three prospect out of Hobart University.  Marpet impressed in the Senior Bowl, outperforming many of the Division One prospects. Marpet is a natural knee-bender, versatile, and an above average athlete. Work is needed in his technique, and Marpet needs to improve his lower body strength so he drive into his blocks more.  A lack of competition could take a while to adjust to, but Marpet would not be asked to start right away, making him an intriguing possible backup option.

Steelers: Running Back Or No Running Back In the 2015 Draft
Checkdown Audible: Brett Keisel deserving of latest award