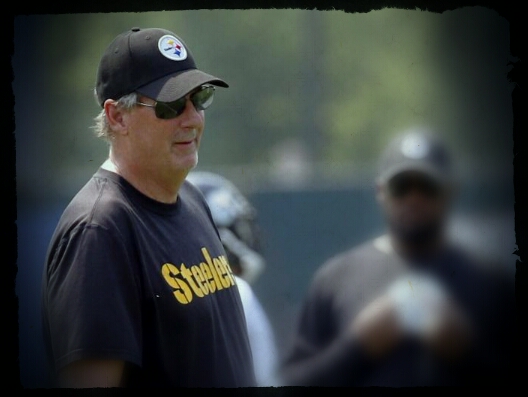 Don’t be fooled.  Once Dick LeBeau parted ways with the Pittsburgh Steelers, Keith Butler took firm control of a defense he’d been waiting to run as the defensive coordinator.  Since becoming head coach in 2007, Mike Tomlin – a ‘defense guy’ – has kept a pulse on the defense, but allowed his coordinators and coaching staff to micromanage for the most part.  The relationship between Butler and Tomlin, however, has created a unique opportunity for the two to mesh.  Tomlin has been more outwardly participating during training camp this year, something he didn’t do out of respect for Hall of Fame player and assistant coach LeBeau.  Part of the change has been a level of comfort Tomlin has with Butler – a man he spent time coaching with at the University of Memphis and Arkansas State in the 1990s.  With a cooperative effort, the two men may just jump start a Steelers defense that has needed a jolt over the past couple of seasons.

When Butler was the defensive coordinator at Arkansas Stake, Tomlin was a secondary coach.   Granted, Butler has Carnell Lake and former corner Ike Taylor in camp to assist as well, but he isn’t opposed to having Tomlin step in to work with the defensive backs.  At this point, any improvement in a secondary that bled consistently in 2014, especially in pass protection, would be welcome.

“I always thought the best chance for me to win a Super Bowl as a coordinator would be (in Pittsburgh),” said Butler.  And his approach is the coach the team to a Super Bowl.  Although Tomlin has given Butler the green light to reign the defense, Butler isn’t opposed to Tomlin giving him extra insight.

”I’ve known him for a long time and I look for his input,” said Butler.  ”It would be foolish for me not to get advice from him when his expertise is defense.”

Butler understands that with a changing of the ‘old guard’ to new, younger players will be part of his challenge, especially in creating an effective plan that utilizes their skills individually and as a unit.  “It’s important that they know I care about them and want them to be successful,” said Butler.  His policy is honesty and fairness.

Several times during the first week of training camp, Tomlin was seen spending time working with the corners and safeties on zone coverages, something he is familiar with and utilized as a secondary coach with the Tampa Bay Buccaneers.  The zone allows defensive backs to read the quarterback instead of focusing on often difficult route assignments.  Butler had hinted that he was willing to change things up, and looks to be implementing a one-gap style along the defensive line that is intended to be more disruptive by penetrating opposing offensive lines, giving the defensive backs time to prepare for teams that employ a zone-blocking scheme that allows the stretch play – like the Baltimore Ravens and Denver Broncos.  In the past, the Steelers focused on a two-gap style that required defensive linemen to read a play before reacting, often forcing them to be slower off the snap.  The goal is to take advantage of the youth and aggressive playing style of defensive ends Stephon Tuitt and Cam Heyward as well as a talented group of linebackers with high potential.

It simplifies a lot of things,” Butler said. “If you’re reading routes, there is some stuff people can do when reading routes that gives you problems and, mentally, it taxes you. If you drop back and read the quarterback, how simple is that? I think it simplifies our defense, lets us be more aggressive and helps us use our speed.”

Former Steelers linebacker Joey Porter, now in charge as an assistant in coaching the linebackers, says that Butler is ready to lead.  “He’s been preparing himself for this situation for awhile,” said Porter.  “He knows the ins and outs of the defense…He’s definitely ready for it.” Porter is familiar with Butler’s perseverance after spending years playing under him.

As for Tomlin, Butler fully believes that his input is not only critical but has been a good thing for them as a coaching tandem.  “That hardest thing about being a head coach is you don’t get the opportunity…” Butler said of Tomlin spending more time focused on helping the defense.  “This is his opportunity.  He’s happy doing it and he’s good at doing it.  It’s going to help us a lot.”

The Steelers aren’t ‘old and slow’ anymore and with a younger defense learning a system that has been tweaked to their athletic abilities, things are looking up.  The players are buying into the system and part of that comes from the level of trust they have in both Butler and Tomlin.

Blast Furnace: Don’t get caught up in training camp storylines
Steelers Release First Camp Depth Chart As They Get Set for HOF Game