Checkdown Audible: Drew Rosenhaus needs to get out of Antonio Brown’s head 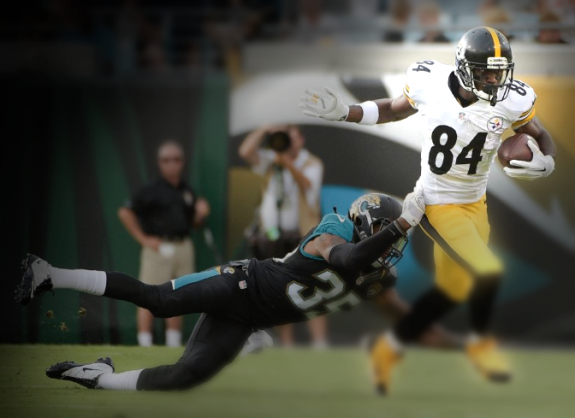 Yes, it is happening again.  Infamous sports agent Drew Rosenhaus is once again spreading rumors about a player he represents and for the second time in a four month span it happens to be regarding Pittsburgh Steelers receiver Antonio Brown.  Rosenhaus is notorious for stirring up non-issues, but the timing of his ‘leaks’ shows a lack of respect to the Steelers as well as Brown.  Once and for all, Rosenhaus needs to shut up and get out of Brown’s head.  The sooner the better.

Brown is the leading receiver for the Steelers and was given a $42 million contract with three years left on it before it expires.  Smack dab in the middle of the most important time of the season for overall preparation, Rosenhaus is insisting that Brown is unhappy with the deal he has with Pittsburgh and allegedly met with team representatives while the team was in Jacksonville.

Rosenhaus is a slick-talking auctioneer of an NFL agent, but the way he has negotiated deals has often been questionable.  He has made millions wheeling and dealing.  He began in Miami, a manic representative who doesn’t mind using deceit to get what he wants.  In a Sports Illustrated article, Rosenhaus was said to “scream, cajole, threaten and whine”, supposedly to defend the interests of his clients.  And because he thrusts the needs of his clients above those of NFL organizations, he has made a name for himself for being blindly ambitious and often underhanded in his dealings.  Rosenhaus admitted, “I am not 100 percent honest with teams…It’s my job to represent my clients and use everything I can to do right by them.”

In 1995, Rosenhaus was involved in an incident involving Steelers free agent tight end Eric Green, shopping him to the Miami Dolphins with deception that involved nearly $2 million in fake offers.  After hearing that other clubs were willing to pay that amount, Miami signed Green for $12 million over six years.  Green didn’t pan out as a top-tier tight end and in the end the Dolphins felt burned.

Veteran NFL agent David Ware said, “Drew tells a player that he’s worth more money…that he’s better than the guy starting in front of him.” Ware said the result was often that the player Rosenhaus guided was encouraged to see his fellow teammates as the enemy and a co-conspirator of preventing more money.  The result was that it broke down team dynamics.  But, Rosenhaus openly admits he doesn’t have one ounce of respect for teams, let alone their dynamics.  It’s about money  and his delusions that he is the only agent able to get players the deals they deserve; teams be damned.

Rosenhaus has been scrutinized and accused of mismanaging the careers of several of his clients, including that of former Miami safety Louis Oliver.  Although Oliver, at the time, defended Rosenhaus as being a friend that would do anything for him, the controversy continued as Warren Sapp became the next player to join the circus.  Rosenhaus helped Sapp (who failed a drug test before the draft) improve his draft stock while aiding Brian Blades in Seattle following a conviction for manslaughter.  The man thrives in the center of constant chaos.  The NFLPA even sanctioned Rosenhaus for violating union regulations.

Rosenhaus looks to be pressing the Steelers leadership to hand Brown a big present in time for Christmas.  The Steelers have never, repeat never, negotiated with any player that has as many years remaining on a contract as Brown has.  Granted, Brown earned the team’s respect after two seasons where he snagged 239 receptions for 3,197 yards and moved into the top tier of NFL receivers.  Brown was interviewed following the Jacksonville game as saying he didn’t know if he’d get a new deal.  “I let (Rosenhaus) handle that.  I’m just focused on getting better.”

Brown’s statements seem to mimic earlier comments after rumors flew that he was considering holding out of training camp.  If he’s serious about getting better, he needs to tell Rosenhaus to just settle down and be patient.  It isn’t that the Steelers are disinterested in keeping Brown around, but it has been said before – when a player makes a contract, they should meet the deal and keep their word while fulfilling it.

Brown is undoubtedly a great receiver.  He isn’t the highest paid player at the position in the NFL, but if dollar signs are what he is visualizing, how can he become the best at his position in the league?  It’s pretty hard to build strong ties with your fellow teammates when all they can see is the desire to get paid instead of dedication to making the team successful.

The Steelers saw it in Plaxico Burress, Emmanuel Sanders and Mike Wallace.  In fact, Brown was given the nice contract despite playing behind Wallace on the depth chart.  Wallace left Pittsburgh, Brown stepped into his starting role.  What is interesting is that all of the players mentioned above are receivers.  The agent for Burress: Rosenhaus.  Sanders: Steve Weinberg.  Wallace: James “Bus” Cook.  Each and every one of those players has experienced some drama related to their movements in the league.  For Rosenhaus, his representation of DeSean Jackson and Terrell Owens should be a tale of caution for Brown.  When the heat was on the Steelers when it came to Burress, Sanders and Wallace – they didn’t cave.  If Brown can’t see the danger of continuing to push the money issue with Rosenhaus as his leverage, the young man has some troubling times ahead.

If Brown truly wants to get better and be a huge contributor to the Steelers, he needs to get Rosenhaus out of his head and get his head into football.

Between the Hashmarks: Steelers show optimism amidst growing pains
Bud Light Kicks Off NFL Season With New Steelers Can