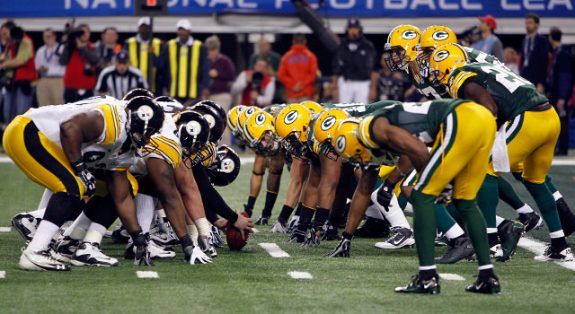 Sunday’s match between the Pittsburgh Steelers and the Green Bay Packers is an interesting draw.  Remember when these two teams faced each other vying for a Super Bowl championship?  The Packers came out on top.  This is a new year, a new season but these two teams have some very similar things going on in their camps.  While both teams are looking for the next players to step up on defense, their offenses look to be at the top of the league in 2015.

When it comes to high-value quarterbacks, Ben Roethlisberger and Aaron Rodgers are both considered to be constantly competing for the top 5 in the NFL.  In the Packers’ first preseason game of 2015, coach Mike McCarthy kept Rodgers in with the first-team offense the entire first quarter.  Coach Mike Tomlin didn’t say how long he’d keep Roethlisberger in on Sunday during his Friday press conference, but it is likely a safe bet with Bruce Gradkowski not yet 100 percent that Landry Jones will round out the game.  The risk of injury to Roethlisberger may be too great to keep him in.  McCarthy may play Rodgers longer this week, but at what cost?  With starting left tackle David Bakhtiari injured and likely out on Sunday, that leaves Rodgers’ blind side exposed.  Prediction:  Roethlisberger goes three offensive series at most.

Both the Steelers and Packers have built dangerous offenses in the past couple of seasons.  While many feel that Rodgers has the upper hand as MVP and his ability to run if necessary,  Roethlisberger is still considered the best at escaping some pretty weird situations to extend plays.  The two quarterbacks will be relying on their offensive lines to do their jobs in order to crank up the tempo.

Green Bay has a nice collection of receivers regardless of the recent departure of Adrian Coxson that has drawn interest as to whether he was let go with a “failure to disclose physical condition” designation (which has only been in existence since 2011).  The list includes:

Although Nelson and Cobb are considered to be the top receivers at this time, it is an interesting coincidence that the Steelers have similar depth at the position as well with the following players:

There is a ton of rookie talent there for both teams.  Tomlin has already ruled Goodwin and Nelson out for the game, but he’s still in the mode of examining talent.  Murphy is expected to play receiver instead of taking snaps as a quarterback.  With NFL teams airing the ball out, it certainly appears that Pittsburgh and Green Bay are ready to fill their rosters with receivers that will give their quality quarterbacks plenty of targets in the open field.  Packers receiver Davante Adams has had a nice camp as a second-year player and many expect him to breakout this season due to his ability to create separation and a vertical leap that coaches cherish.

When it comes to rushers, Eddie Lacy and Le’Veon Bell very well could have switched places in the draft.  The Steelers were interested in both players during their respective draft.  While Bell is a chiseled finesse type back, Lacy is a bruiser.  They both have great awareness as they push through the block made by the offensive line.  The match up between the two running backs should be exciting to watch as long as both are on the field Sunday.

The advantage goes to Pittsburgh for having a secure backup in DeAngelo Williams.  The Packers have several rushers behind Lacy, but even Packers insiders aren’t sure that there is any one player that could step up and take over should Lacy falter due to injury, especially due to his past history and questions about overall longevity.  As it stands, the Packers have James Starks listed at number two on their depth chart with Rajion Neal, Alonzo Harris and John Crockett down the line.  Pittsburgh will be without Josh Harris, so that means that Dri Archer, Jawon Chisholm and Braylon Heard are likely to get a few snaps, but have yet to make a statement that they will contend for a higher spot on the roster.

While both offenses look primed for success, the Steelers and Packers are looking for answers in their defensive backfields.  The Packers have several cornerbacks competing for a starting roster spot while the Steelers continue to look at their safeties being able to give the assistance to their corners that is needed against teams like Green Bay that love the long pass.

These two teams couldn’t be more evenly matched on offense.  That creates a potentially exciting pairing for Steelers fans at Heinz Field who will get to experience seeing their players at home for the first time in 2015 – and in a modified, updated stadium at that.