Between the Hashmarks: NFL’s latest focus on Steelers ridiculous 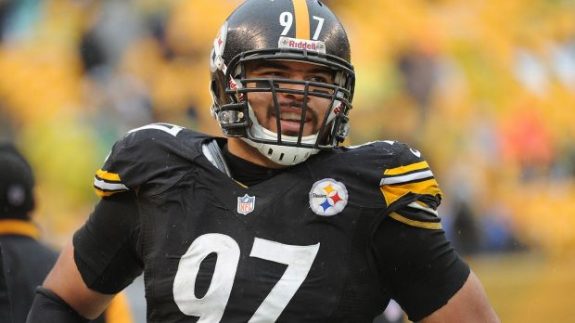 The NFL, as a league, has spent plenty of time focusing on some ridiculous things in light of all the serious issues they have chosen not to address – at least not immediately or publicly – but they set the bar even higher on petty issues this week when they focused on three Pittsburgh Steelers players for minor infractions that were relatively costly to those individuals.

Cam Heyward has been having an outstanding year and his football roots go deep.  The son of former NFL fullback Craig ‘Ironhead’ Heyward, Cam has expressed the level of respect and love he had for his father.  On Monday Night Football, Heyward wore eye black – something he has done for years – but in honor of his father, added the words “Iron” and “Head” beneath his eyes.  It was an homage to the struggle Craig went through as he battled cancer that took his life in May 2006.  Heyward also had “Iron Head” on his shoes, but it was his face the league noticed and took exception to.

On a night when players were wearing pink items in addition to their jerseys, things like shoes, shoe laces and towels that the league approved and is willing to prompt fans to purchase in their official shop, it seemed only natural for Heyward to do something to honor his father – even if if wasn’t breast cancer Craig Heyward suffered with.  Instead of understanding the efforts, the league handed down a $5,787 fine for breaking the uniform policy.

Heyward has stated that he will try to appeal the violation, but understands the league has been fairly strict on what it will and will not allow players to have on their person in games.  Heyward’s intention was not to break the rules, but felt it appropriate considering the spirit of the overall campaign the league has been promoting: to raise awareness of cancer.

“To lose a person like that due to cancer, for cancer awareness, I don’t think it should be a big deal at all,” Heyward said after Wednesday’s practice.

On Wednesday, Heyward posted (on social media): “Got fined for honoring my Dad who bravely fought cancer on my eye black. #Nevergiveup #CancerSucks”

Vice President of Football Operations, Troy Vincent, came down hard on running back DeAngelo Williams after Williams expressed his desire to wear pink accessories in honor of his mother, Sandra Hill, the entire 2015 season.  Williams was informed, regardless of the fact that Hill passed of breast cancer in May 2004, Williams was not to wear any pink accessories outside of the month of October.

Williams, who dyed the ends of his hair pink, wanted to honor not only his mother but all who have dealt with breast cancer.  According to ESPN‘s Lisa Salters, Williams was not happy with the news that he would not be allowed to do more.  When asked how it made him feel, Williams said, “The same way it made you feel after you heard it — like, man…(Vincent) told me no.  I’m assuming they are telling everyone else no as well…It wasn’t about selling it.  You know and I know and everybody else knows before I made the phone call.”  Williams further told Salters that breast cancer awareness is a big deal to him.  “It’s not just about October for me; it’s not just a month, it’s a lifestyle.  It’s about getting women to recognize and get tested.”

In response, Williams will purchase 53 mammogram tests.  The number is significant; it is the age his mother was when she passed.  The tests will be performed at a hospital in Charlotte, North Carolina, where Williams played for nine seasons with the Carolina Panthers as well as a Pittsburgh hospital.

Tuck in that shirt, Tuitt

Per Mark Kaboly, Stephon Tuitt will be fined the same amount Heyward will be — $5,787 — for having an untucked shirt during the Chargers game.  According to Kaboly, Tuitt is also appealing the decision.

Steelers DE Stephon Tuitt’s fine for having shirt untucked during SD game is $5,787. He said he will appeal.

Is this all really necessary?

The league obviously wants to have a certain ‘appearance’.  They won’t budge on the uniform policy.  That much is clear.  What isn’t clear is why a uniform violation as simple as an untucked shirt or personal tributes to parents who’ve passed from cancer – again, something the league consistently petitions to the public in regards to awareness – is more serious than, oh, improper management of a game clock or that they are being sued for making the Super Bowl so expensive to attend that the common, everyday fan can no longer attend.  The league admitted they messed up in the Chargers/Steelers game, robbing Pittsburgh of extra seconds.  Anyone who has attempted to purchase Super Bowl tickets knows the person that brought the suit against the league is highly unlikely to win, but has a point about how expensive the big event has become.

The NFL is in the billions-of-dollars business.  They want to look a certain way.

The problem is this:  by setting such poor examples in regards to how they are singling out these three Steelers players, their image is one of being interested in cancer awareness and uniform policies only for the sake of what those uniforms look like.  They can rant and rave about how if they gave one player an exception, another may want to alter their own uniform for another cause or reason.  They can say that it has been and will continue to be policy.  It’s all fine to give lip service to your ideals as long as you are consistent.  NFL fans can see right through that, though.  It wasn’t that long ago that fans were opting to boycott purchases from the NFL Shop itself due to the ridiculous prices they were being asked to fork over for something as simple as a pair of socks because they were “officially licensed” by the league.

You may think this is all sour grapes just because it involves Steelers players for me.  Actually, that is far, far from the truth.  This is all about hypocrisy within the league.  How long did it take before the NFL addressed concussions, or domestic abuse, flagrant abuse of rules or even criminal acts committed by players that spent time in prison for felonies and were allowed to return to the game?  Do those things not project an image of the league?  I would think an untucked shirt minor compared to battery and assault.

There will be some who read this that will say, “They do, that’s why the fines are so much higher for those things.”  I understand.  I really do.  The problem is that the league has become so inconsistent in how it deals with real infractions compared to minor issues that their image is being injured mostly by themselves – not players.  Roger Goodell has never been my favorite commissioner, and Vincent has picked some of the strangest things to harp on (in my opinion), but the NFL is a business.  Do they have a right to have rules? Absolutely.  But, isn’t it a bit ridiculous to promote ideas (like breast cancer awareness) and then punish players who have dealt with those ideas first-hand?  I’ll let you decide.

Checkdown Audible: Steelers get much-needed win
Martavis Bryant Reinstated, But Looks To Have To Earn Return To Play