Between the Hashmarks: Tomlin was clear about Vick, Jones at QB 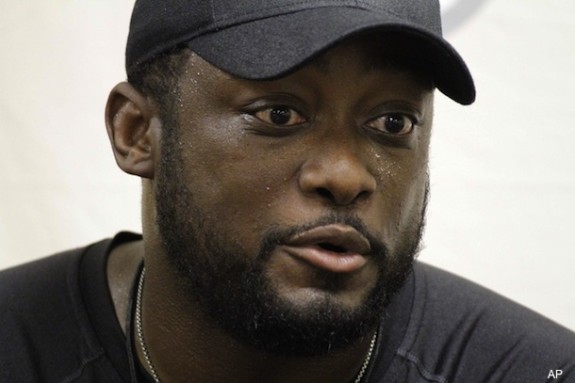 The Pittsburgh Steelers have heard the rumblings from fans.  Half of Steelers Nation hated the fact that Michael Vick was even signed by the team.  The other half were bemoaning the fact that Landry Jones was retained this season.  After Sunday’s game, some of those viewpoints changed.  Some of the bickering on social media only got louder.  Regardless of the fans, it was Mike Tomlin who made it clear that there absolutely is zero quarterback controversy in Pittsburgh – and Mike Vick would have remained in Sunday’s game had he not been injured.

Headlines across the league have Landry Jones’ name in them after the Steelers upset the Cardinals at Heinz Field.  Every major sports network was talking about Jones’ performance versus Vick’s.  In 12 quarters of football – the amount of time Vick has played as the starter in place of Ben Roethlisberger – he has thrown two touchdowns.  Jones did that in a single quarter.

When he was asked about Jones, Tomlin said that with five preseason games, Jones got more snaps than anyone at the quarterback position.  In that area, Jones was “prepared”.  Before the game against the Cardinals, however, Jones had not spent time with the first team. Tomlin and Haley were giving Vick as many extra snaps as they could as he continued to learn the offense.  It has been a concern for over two weeks.  In that way, Jones was not as prepared as he could be to just hop into the game.

When he was asked if he considered placing Jones into the game last week when Vick struggled, Tomlin told the media that he had not.  And when asked a similar question on Sunday, whether he gave any thought about inserting Jones into the lineup prior to Vick’s injury, Tomlin said, “No.”  Period.  End of question.

As the battle between fans continues over who the better quarterback is (Vick vs Jones), the Steelers were given a unique opportunity on Sunday.  If they didn’t have confidence in Jones before his fourth-quarter performance against Arizona, they may have seen enough to reconsider moving him up the depth chart.  His performance should also give the Steelers and Roethlisberger more time to get ready for a full return to play at 100 percent health rather than rushing his rehabilitation on an injured left knee.  Whether Vick will once again be the starter against the Chiefs remains to be seen.  The small tear in his hamstring does not immediately appear serious.

Jones has yet to prove he is the best possible choice to lead the offense.  He has plenty of room for further development.  If he is to surpass Vick, who arguably has more overall NFL experience, he will have to spend more time preparing with players on a practice field beyond his preseason snaps to do so.

Tomlin indicated that there is still plenty of work to be done.  The Steelers aren’t where he’d like them to be, but on Sunday, he felt they did enough to secure the win and take advantage of opportunities they were handed.

Checkdown Audible: Welcome to the game, Landry Jones
Cover One: Tomlin Doing What Most Can’t Do