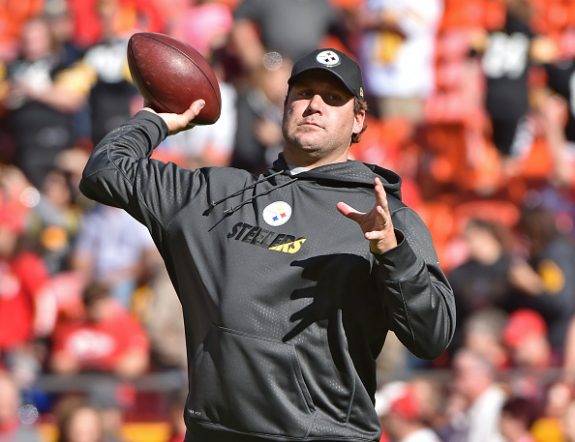 For good reason there’s been plenty of nervousness about the knee of Steelers quarterback Ben Roethlisberger this week. Even more so after he came out and said after practice last week that the knee was bothering him.

With the Steelers getting set for a huge AFC North showdown with the unbeaten Bengals this week, Big Ben has been a full go in practice, and it seems like all is well with Roethlisberger’s knee.

Steelers reporter Ed Bouchette said he had “no doubt” that Roethlisberger would play this week against the Bengals, and the Steelers QB said that he’s good to go, and there’s ‘no issues’ with the knee following two practice sessions taking first-team snaps.

It’s a huge step in the right direction for the quarterback, who the team has been anxiously waiting to get back following a not so great outing from Landry Jones last week in Kansas City against the Chiefs in a 23-13 loss.

The question now is how will that knee respond when Ben takes the field against the very good Bengals defense, a unit that is ranked 14th in yards allowed, and is giving up 261.5 yards per game against the pass.

Sunday will fall not only on the shoulders of Ben to not try and force things, but also on running back Le’Veon Bell, who was hurt in last year’s season finale against the Bengals, a game the Steelers won to win the AFC North.

No matter how you look at it, Ben’s knee will be the most talked about body part in the Steel City all the way up to kickoff Sunday at Heinz Field.