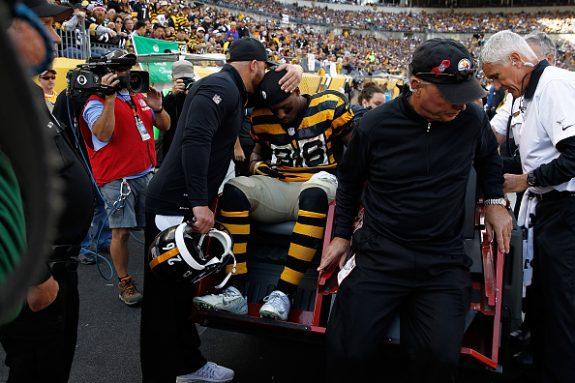 Four weeks ago the Steelers got away with not losing quarterback Ben Roethlisberger for the season after it looked like it could have been a season ending injury.

The news on Le’Veon Bell isn’t as lucky.

According to ESPN’s Adam Schefter, an MRI following Bell’s injury against the Bengals shows that he “badly tore” his MCL, and it’s not almost a for sure that his season is over.

Schefter said in the tweet that Bell will be re-evaluated Monday, but unless there’s a miracle he’s carried the ball for the last time this season.

Bell went down for the second straight season against the Bengals at home. Last year he was hurt in the regular season finale vs Cincinnati and missed the playoff loss to the Ravens.

On the year, Bell had 511 yards with three touchdowns.

The running back did send out a tweet to show his thanks for fans that teammates that wished him well after he was injured.

I appreciate the concern and support from everybody who's sent me txts, tweets, phone calls, etc…I'll be okayy, love youu all! #Juice