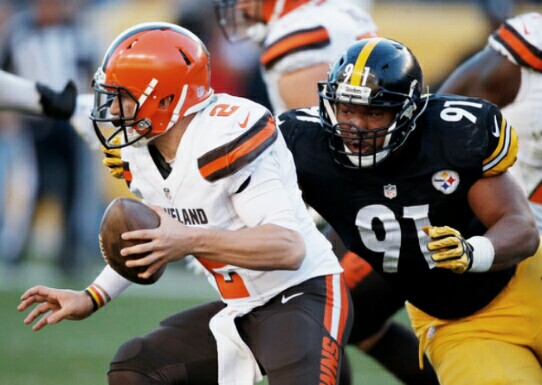 The Pittsburgh Steelers defense is doing a lot of things right.  They keep improving as a squad.  Their communication is better on the field.  Against the Cleveland Browns they completely shut down the run.  With the bye week upon them, the Steelers defense should focus on improving pass defense.

Pittsburgh ranks at No. 5 in rushing yards allowed per carry (3.8) and average yards per game on the ground (93.0).  Stingy play up front by guys like Stephon Tuitt (pictured pressuring Johnny Manziel) and Cam Heyward has kept many running backs hitting a brick wall.

The entire Steelers defense ranks at No. 22, though, due to allowing 371.4 yards per game against them.  That is in large part due to the fact that they have allowed the sixth-most receiving yards by opponents in the league so far in 2015.  They are allowing an average of 278.4 passing yards per game.

Yes, they are keeping teams out of the end zone with tough stands (just over 19 points per game), but their upcoming opponents can see those passing numbers as their keys to winning.

Coach Carnell Lake has struggled to keep his defensive backfield healthy and productive.  They have started picking up a few more turnovers, but plenty of times that squad has played soft coverage and gotten burned.  Tradition says that strength up front should allow the safeties and cornerbacks time to read routes and trap receivers.  Unfortunately, the Steelers aren’t meeting that idealogy.

One area that needs to be addressed in the bye week is covering tight ends that break off blocks into the open field – especially over the center.  The Steelers can’t expect the linebackers to both pressure the quarterback and stuff the run if they are forced to drop into mid-zone coverage with no over-the-top help.

Keith Butler needs to drop the cover-two he has used often this season.  The biggest reason that scheme is burning the defensive backs is due to smaller corners who aren’t physically capable in many cases of bumping larger-framed receivers off the line of scrimmage.  It’s also due to a lack of closing speed by the safeties in the open field.  When Bud Dupree or Lawrence Timmons has to run downfield with a receiver, it is an obvious mismatch that opposing quarterbacks are capitalizing on.

“The defensive line won the line of scrimmage and helped stop the run,” linebacker Lawrence Timmons explained after the win on Sunday. “Our secondary and third level of defense, we just rolled off of them. You saw the type of plays that we made.’’

The Steelers are on pace to allow nearly 6,000 yards by opponents – more than any team in franchise history.  If they allow more than 5,805 yards there will be comparisons to the 1988 team that went 5-11 on the season.  It’s due to their current pace in passing yards allowed, and if they can’t figure it out, they may pass 2014 as the second Steelers defense in team history to allow more than 4,000 yards through the air.

The defense can, and should, refocus on their personnel packages as well as schemes that have produced the most success in pass defense during the bye.  It’s time to get everyone on board now that this season that looked lost early on has a chance to make a playoff run due to their fifth-seed placement in the AFC through Week 10.

Roethlisberger Comes In to Save the Day; Steelers Roll Over Browns 30-9
Steelers Rival in Ravens Lose Both Forsett and Flacco for the Season in Sunday’s Win