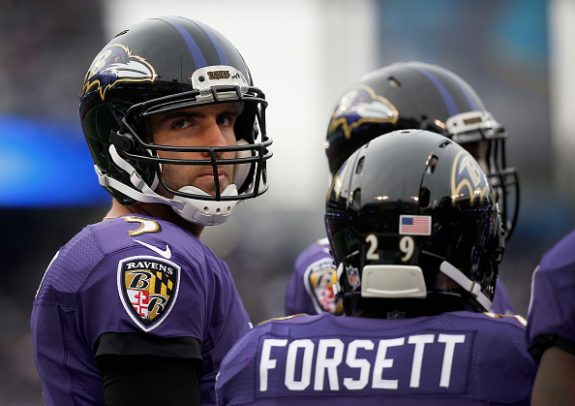 The Steelers final two games of the season will be in Baltimore and in Cleveland, and while the team has plenty to do before that time, it looks as if those games are going to be against two teams they should beat with relative ease.

Last week the Steelers got a look at the Browns, and they basically threw all over them for a 30-9 win. While they play them last in Cleveland, the game before that against the Ravens suddenly has a very different look after what took place in Baltimore on Sunday during the Ravens 16-13 win over the Rams.

Sunday Baltimore suffered two huge injuries on their offense that will give them a totally different look entering the final six games of 2015.

First, the team lost running back Justin Forsett with a broken right arm. Forsett broke the arm on a tackle made by Aaron Donald. Coach John Harbaugh announced after the game that Forsett is lost for the season.

On the season Forsett rushed for 615 yards, two scores and was rushing for 4.5 yards per carry.

While that’s a big injury, that wasn’t the biggest, as the team also lost starting QB Joe Flacco to a torn ACL, and he’s also done for the season.

Flacco was one of the most durable QB’s in the NFL, as he had started 122 straight games, a streak that will end against the Browns next Monday night when the teams meet in Cleveland.

“We’ve got to step up and rally for him, just like he’s done for so many other guys,” head coach John Harbaugh said after the win.

The injury to Flacco took place on the game winning drive when a Rams defender rolled into him.

The quarterback spot for the Ravens will be manned by vet Matt Schaub, who was with the Raiders last season and is best known for his time with the Texans.

In seven seasons Schaub is a lifetime 46-44 as a starter.

If the Steelers need to win the last two games to earn a playoff birth or secure one, the final two games should be theirs for the taking, even more so after Sunday’s news from Baltimore.