Steelers vs Broncos: 3 Things To Watch In Week 15 Contest

Steelers vs Broncos – This Week 15 contest will be a heated affair. Three things to watch for as the Steelers and Broncos chase the postseason. 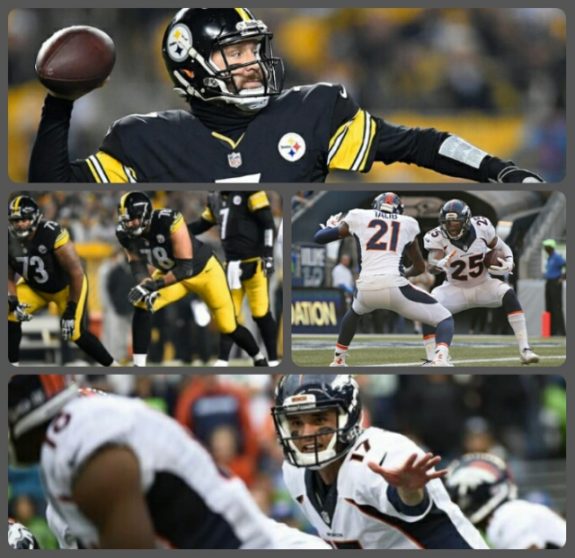 NFL Week 15, 2015 – This contest between the Pittsburgh Steelers and Denver Broncos promises to be an exciting matchup.  The Steelers and Broncos are both moving in the right direction at the end of the 2015 NFL regular season.  Two teams, both looking for a playoff shot; both wanting and needing a dominant performance. Here is a breakdown of three things fans should watch for on Sunday.

Teams that have faced Steelers quarterback Ben Roethlisberger know that the veteran always works a little magic in big games; finding a way to keep plays alive and taking on pressure only to slip out to find a target.

Roethlisberger isn’t immune to mistakes, but when he has been healthy this season, he has benefitted from a solid offensive line that saw teams like the Chiefs and Bengals throw everything at them.

In nine games, Roethlisberger has only been sacked 14 times.  In large part, that has also been due to Roethlisberger’s quicker delivery to receivers and quick reads of the opposing defense.

Roethlisberger is smart and on a hot streak right now in running an offense that has been relatively balanced between pass and run.

Watch for Big Ben to mix things up against the Broncos, even if he has to take a hit to deliver a pass to his trio of Antonio Brown, Markus Wheaton and Martavis Bryant.

The Broncos know that pressuring up front is key to containing Roethlisberger and stopping DeAngelo Williams and the Steelers run game.

Von Miller has been an absolute force for the Broncos D this season. If he can get himself and his teammates to use the outside rush effectively, the Steelers will have trouble putting together another game where they score 30 or more points.

Steelers left tackle Alejandro Villanueva is still picking up the nuances of raw, quick pressure from veteran defenders. He may get extra help this week if the Steelers use Roosevelt Nix or Will Johnson at fullback.

Cody Wallace has shown a bit of a feisty side at center and David DeCastro may just be the Steelers’ best blocker. Adjustments will be key, so watch for different blitz packages from Denver.

In the defensive backfield, Denver has been stingy and is the best in the league against the pass.  Teams that took advantage of mismatches and misdirection were able to find ways to thread the ball to receivers.

The Patriots and Chiefs used the run and tight end sets to open the field, but Chris Harris, Jr., and Aqib Talib are quick in the pursuit; especially speedy in teams that target the perimeter.

Watch for the Steelers to move from their primary receiver (Brown) if he’s blanketed for easier targets and the Broncos to try to press man-to-man in the open field.

Osweiler Versus The Steelers Defense

The Broncos offense has had some strange looks at times this season. With Brock Osweiler at quarterback, Gary Kubiak and company are likely to get the play-action going early and often.

Osweiler can kick out on a bootleg to either side. This becomes dangerous for the Steelers defense, especially if the Broncos mix in the run, mainly because Pittsburgh has shown a weakness in assignment coverage this season.

The Steelers rank sixth in rush defense through Week 14. If they bottle up the run and force Osweiler to hide in the pocket, the Broncos become more predictable.

That forces Osweiler to throw to score – and more opportunities for turnovers. Key Steelers players will be Cam Heyward, Lawrence Timmons and James Harrison as they use veteran experience to push their teammates along the line, edge and linebacker drops into coverage.

C.J. Anderson and Ronnie Hillman having success against the Steelers will green-light Osweiler to throw the deep ball against a Steelers defensive secondary that has been burned this season. If Osweiler can find the chinks in the Steelers’ armor, watch for adjustments from Keith Butler and Carnell Lake.

If the Steelers can’t adjust or rotate personnel effectively in pass protection, Osweiler will certainly press for a ‘W’ on the scoreboard.

Steelers Gab Player of Week 14: Heath Miller
Will the Steelers and RB Le’Veon Bell Reach a Long Term Deal by the July Deadline?